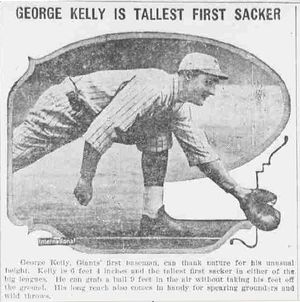 Kelly shown in a newspaper article in 1920. He was one of the tallest "first sackers" in the league. "He can grab a ball 9 feet in the air without taking his feet off the ground."

"Kelly made more key hits for me than any other player." - John McGraw

George Kelly is often seen as one of the more controversial selections to the Hall of Fame, from the time when his former teammate Frankie Frisch headed the Veterans Committee. However, while an underwhelming member of Cooperstown, Kelly still had a 16-year career in the majors, led the league twice in RBI and once in homers, was a slick fielder, and was a key infielder on the New York Giants teams that dominated baseball from 1921 to 1924. He was 3rd in the Most Valuable Player Award voting in 1925, and 6th in 1924.

Called by Bill James the worst selection to the Hall of Fame, Kelly's statistics are most similar to those of Bob Watson. Of course, it's not Kelly's fault that he's in the Hall of Fame, and he was actually a good player - as was the case with Watson - although his statistics are generally not seen as Hall of Fame caliber because he is not in the top 100 in any major offensive statistic. Carl Furillo and Tony Oliva are also in the top five most similar players to him, although they played in different eras.

By the JAWS method of evaluating players, he ranks #90 on the all-time list of first basemen through 2019 (probably in the top 5%). However, only one other first baseman in the Hall of Fame is as low as #57 (Jim Bottomley, who is also considered a borderline selection), and all the others are in the top 40. As a comparison to Kelly, #89 on the list, right above Kelly, is Travis Hafner, a good player but never considered a Hall of Fame candidate.

Prior to the time that the Veterans Committee took a look at him, he had never gotten as much as 2% of the Hall of Fame vote by the BBWAA.

Kelly was the brother of Ren Kelly; his uncle was former Chicago Orphan Bill Lange and a cousin was Rich Chiles.

After his playing career ended, Kelly was a Cincinnati Reds coach from 1935 to 1937 and a member of the Boston Braves staff from 1938 to 1943. He returned to the Reds' coaching ranks in 1947 and 1948. He came back to baseball one more time in 1954 when he managed the independent Wenatchee Chiefs in the Western International League.