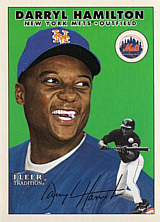 Darryl Hamilton was signed as an 11th round pick in the 1986 amateur draft by the Milwaukee Brewers and scout Fred Beene. He collected his first career hit on June 3, 1988 and hit his first home run on July 19th of the same year.

He underwent Tommy John surgery in 1994 to repair tendon damage. His position change to center field, from right field, was a key contributor in the decision to Robin Yount to retire after the 1993 season.

Hamilton was fatally shot in an apparent murder/suicide at his home in Pearland, TX in the summer of 2015. Initial reports were that he had been shot multiple times while the body of his girlfriend, Monica Jordan, was found with a single apparently self-inflicted gunshot wound; the couple's 13-month-old child was found unharmed. Hamilton was working as an analyst for the MLB Network at the time of his death; he had previously worked in the Commissioner's office in the on-field operations department, had done broadcast work for the Brewers and worked with MLB advanced media.