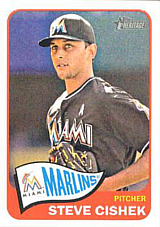 Former closer Steve Cishek boasts 132 career saves in 10 seasons. He holds a Miami Marlins team record with 33 straight save opportunities between June 2013 and April 25, 2014, when he surrendered a 3-2 9th-inning lead against the New York Mets.

Steve made his major league debut in the final days of the 2010 season, then made 45 appearances out of the bullpen in 2011, with a 2.63 ERA and 3 saves. After free agent Heath Bell faltered as the Marlins' closer in 2012, Cishek took over for him late in the season and collected 15 saves down the stretch. Grabbing the role full time in 2013, he racked up 34 saves despite pitching for a last-place team. All of his numbers were excellent, including a 2.33 ERA in 69 2/3 innings and 74 strikeouts against only 22 walks. He led the National League with 62 games finished out of 69 appearances and had a 4-6 record. The Marlins were much improved in 2014, and Cishek continued to excel in late innings, even though his ERA was above 3.00 for the first time. He set a new personal mark for saves when he recorded number 35 on September 14th and finished the season with 39, the 5th most in the NL, to go along with a 4-5 record and 3.17 ERA in 67 appearances.

Cishek struggled early in 2015, blowing 4 of his first 7 save opportunities to lose the closer's job in early May. The Marlins' poor start led to the firing of manager Mike Redmond on May 17th. Steve compounded his woes when he gave up a game-winning double to David Peralta of the Diamondbacks in the 13th inning of Dan Jennings' first game as Marlins manager, to be saddled with a 3-2 loss. He continued to struggle in his next few outings and, on June 1st, sporting a 6.98 ERA with a 1-5 record, he was optioned to the AA Jacksonville Suns with the hope of finding back his groove. Jennings explained that his mechanics had gone out of whack, and that he needed to work on the problem away from the major league spotlight. He made 5 appearances with Jacksonville, not giving up a run, and was soon back with Miami. On July 24th, he was traded to the St. Louis Cardinals for prospect Kyle Barraclough. He was 2-6, 4.50 in 32 games at the time, but his ERA was 0.71 since coming back from his minor league stint. He pitched 27 times for St. Louis, with no wins or losses, a save, and an ERA of 2.31.

Cishek joined the Seattle Mariners in 2016 and went 4-6, 2.81 with 25 saves in 62 appearances. He started the season as the team's closer, but eventually gave up the role in favor of fireballing youngster Edwin Diaz after collecting a few blown saves in midseason. He started the 2017 season with the Mariners, then, on July 28th, was traded to the Tampa Bay Rays for Erasmo Ramirez. He had gone 1-1, 3.15 for Seattle, then was lights out with the Rays, putting up an ERA of 1.09 in 26 games. Following the season, he signed a two-year, $13 million deal with the Chicago Cubs on December 18th. He was a very solid reliever for the Cubs both years, with ERAs of 2.18 in 80 games in 2018 and 2.95 in 70 games in 2019. He sporadically closed games, picking up 11 saves over the two seasons, although he was principally a set-up man. He also managed to maintain a low hit rate - 45 in 70 1/3 innings in 2018 and 48 in 68 innings the second year. He made the first postseason appearance of his career in the 2018 National League Wild Card Game, forcing the only batter he faced, DJ LeMahieu, to ground into an inning-ending double play. The Cubs went on to lose the game to the Colorado Rockies, 2-1 in extra innings, and missed the postseason altogether the following year. He became a free agent again after 2019 and, on January 7, 2020, signed a one-year deal with the Chicago White Sox.

In his one season with the White Sox, which was shortened by the Coronavirus pandemic, he had not decisions in 22 appearances and put up an ERA of 5.40. The Sox made it to the postseason, but he did not appear in any of their games at that stage. A free agent again after the season, he signed a minor league deal with the Houston Astros just as spring training opened in 2021. His deal included a condition that he could ask for his release if he hadn't been added to the 40-man roster by March 25th, a right he chose to exercise when the condition wasn't met. He then latched on less than a week later with the Los Angeles Angels.

Cishek has a sidearm motion that sees him release the ball from a point very close to the ground, helping to keep his pitches always down in the strike zone. His unusual pitching motion is confusing for batters, making his pitches much more effective than his radar gun readings would lead to believe. Unlike many other sidearm throwers, he is not particularly vulnerable to batters facing him from the other side (i.e. left-handed batters) which has allowed him not be confined into the role of a specialist.