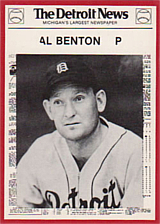 "There is the best relief pitcher in the business right over there. There's a man for you. Works harder and better'n anybody I ever saw. You don't mind leaving a game in his hands when you gotta go." - Bobo Newsom, to the New Orleans Times-Picayune, May 22, 1941

Benton was the Dick Tidrow of his time, according to similarity scores. He had a 14-year career (interrupted by World War II), all in the American League, and is credited with 66 saves, which is lot considering that the statistic did not exist then. His record was 98-88. There were times when he was a starter; in particular, he had a very good year in 1945, when the Detroit Tigers won the pennant. His ERA was 2.02, and he had a record of 13-8 with 3 saves. In the 1945 World Series against the Chicago Cubs, he appeared in 3 games in relief with a 1.93 ERA. During his career, he was a two-time All-Star and twice finished second in the league in ERA. In 1949, pitching for the Cleveland Indians, Al set a major league record with 39 consecutive scoreless relief innings. This record was tied in 2008 by the A's Brad Ziegler.

Benton entered the Navy in November 1942 and was discharged in November 1944. He died in 1968 from burns suffered in a fire when the motel he was managing burst into flames.