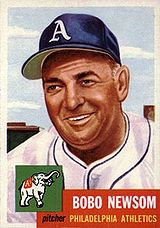 " . . . whenever Bobo asked for more dough . . . Bobo always got it." - Newsom, talking about his relations with Clark Griffith of the Senators

Bobo Newsom pitched 20 years in the majors, making 17 stops in the big leagues with 9 different clubs (including the Washington Senators on 5 different occasions). One of baseball's colorful characters, he referred to himself in the third person and was often quoted saying humorous things.

After winning 15 games in the minors in 1928 and 19 for the Macon Peaches in 1929, Newsom reached the majors with the Brooklyn Robins, appearing in 5 games over two seasons in 1929 and 1930. He spent 1931 back in the minors before being selected by the Chicago Cubs in the 1931 Rule V Draft. He appeared in just one big league contest for the Cubs in 1932 and was in the minors again in 1933, when he won 30 games for the Los Angeles Angels of the Pacific Coast League.

Before the 1934 season, Newsom was once again chosen in the 1933 Rule V Draft, this time by the St. Louis Browns. He stuck with the big league club this time and soon joined the Browns rotation. On September 18th, in a game against the Boston Red Sox, he thew nine innings of no-hit baseball, only to lose on two walks and a hit in the 10th. That year, he led the American League with 20 losses and 149 walks but posted a respectable 4.01 ERA. After losing his first six decisions for the Browns in 1935, he was sold to the Senators and ended up leading the AL in losses again, this time with 18.

"When the president comes to see Bobo pitch, Ol' Bobo ain't a-gonna disappoint him." - Newsom, explaining why he stayed in a game Franklin Roosevelt had come to see, in spite of suffering a fractured jaw during the game

With President Roosevelt in attendance, Newsom was the Senators' Opening Day starter in 1936. After suffering a broken jaw from a throw in the contest, he remained on the mound and threw a four-hit shutout win over the New York Yankees. He posted the first winning record of his career that year, and in the middle of the following summer, he was traded to the Boston Red Sox as part of a five-player swap. After the season, he was again dealt, this time back to the Browns.

In 1938, Newsom won 20 games for St. Louis and led the AL with 31 complete games despite posting a 5.08 ERA, the worst full-season mark of his career and the highest ever for a 20-game winner. He was selected for the All-Star Game and finished fifth in the Most Valuable Player voting that year. After starting off 3-1 for the Browns the next summer, he was traded to the Detroit Tigers, for whom he won 17 more, while again leading the American League with 24 complete games.

Newsom had his best season in 1940, going 21-5 with a 2.83 ERA for Detroit while putting together a 13-game winning streak, and hurled three scoreless innings in that summer's All-Star Game. The Tigers reached the World Series that fall, and he earned the complete game win in Game 1. Sadly, Newsom's father died of a heart attack the following day. Instead of returning home, Bobo took to the mound in Game 5 and hurled a three-hit shutout victory, which he dedicated to his father. He started again in Game 7 and gave up two runs in a third complete game but took the loss as Detroit fell to the Cincinnati Reds.

After becoming the highest-paid pitcher in baseball, earning $35,000 per year, Newsom lost 20 games for the Tigers in 1941. The following spring, his contract was purchased by the Senators, the first of five transactions involving him in two years time. He was acquired by the Philadelphia Athletics after the 1943 campaign and stuck with the club for a while, again leading the AL with 20 losses in 1945. Following another stint with the Senators, he was sold to the New York Yankees during the summer of 1947. He won 7 games down the stretch with New York and appeared that fall in two games of the 1947 World Series, which the Yankees won.

Newsom pitched for the New York Giants in 1948 before a three-year tour of duty back in the minors in the Southern Association. He recorded 46 wins over that time and made it back to the big leagues as a 44-year-old with the Senators in 1952. Shortly thereafter, he was acquired by the Athletics, for whom he ended his career as a 45-year-old in 1953.

Overall, Newsom's pro baseball career spanned 26 seasons. He won 211 games and lost 222 in the majors, becoming the second pitcher, after Jack Powell, to win at least 200 with a losing record. He went 139-105 in the minors, totaling 951 professional games and 5,826 innings.