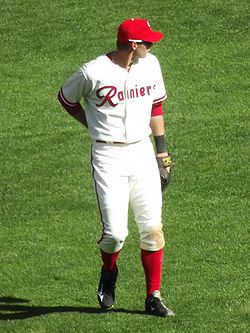 Michael Saunders appeared for the Canadian national team in the 2008 Olympics and made his major league debut with the Seattle Mariners in 2009.

He was a member of the 2003 Canadian Junior National Team.

Saunders was drafted in the 11th round of the 2004 amateur draft by the Mariners as a draft-and-follow pick. After a year of junior college he was signed by scout Wayne Norton. He debuted professionally with the Everett AquaSox in 2005 and hit .270/.361/.474 and was thrown out in 7 of 9 attempts to steal. Baseball America named him the #13 prospect in the Northwest League. Saunders slipped to .240/.329/.345 with the 2006 Wisconsin Timber Rattlers, though he did tie for third in the Midwest League with 8 triples and was stealing bases much more efficiently (22 for 29). He joined Team Canada for the Americas Qualifying Tournament for the 2008 Olympics and hit an impressive .448/.500/.586 with 3 assists in 7 games in left field. He led a team where four starting position players were former major leaguers in batting average and finished 5th in the tournament overall. Canada failed to qualify for the Olympics.

Saunders hit .298/.390/.470 with 99 runs, 15 home runs and 29 stolen bases in 40 tries in the minor leagues in 2007. He batted .299/.392/.473 in 108 games for the High Desert Mavericks and .288/.373/.442 in 15 contests for the West Tenn Diamond Jaxx. He tied Chris Nelson for 6th in the California League with 27 steals and was 9th in runs despite his late call-up to AA. Saunders also got the chance to shine in the 2007 Futures Game, in which he was the starting center fielder and leadoff hitter for the World team. He faced Jeff Niemann to open the first and grounded to 2B Chris Coghlan, whose error put Saunders aboard. Saunders stole second, beating Bryan Anderson's throw. Chin-Lung Hu then doubled home Saunders for the World's first run in their eventual 7-2 win. In the third, he coaxed a leadoff walk from Joba Chamberlain and again stole second, then scored on a hit by Hu. Gorkys Hernandez pinch-hit for him in the 5th against Luke Hochevar. He led Mariners farmhands in OBP. Baseball America rated him the #16 prospect in the California League, between Hainley Statia and Andrew Bailey.

Saunders was less successful in the 2008 Final Olympic Qualification Tournament, batting .214/.250/.357. He did drive in six runs in seven games and Canada won the tourney to clinch a spot in the 2008 Olympics. Michael played DH in the competition. He had his best game in a crucial match-up with host Taiwan, driving in two runs (including Stubby Clapp with the tying run with two outs in the 9th) and breaking up a double play to allow Clapp to score another in their 6-5, extra-inning win.

In the 2008 Olympics, Saunders was Canada's second-best hitter, after Nick Weglarz. He hit .286/.333/.571 with 2 home runs and 5 runs in 7 games for the 6th-place team, which had 5 losses - all by one run. Saunders hit homers against the host Chinese national team and Cuba, a two-run shot off of Adiel Palma. He had a chance to tie it in the 9th against Cuba, down 7-6 with 2 outs, but struck out against Norberto González. In the preliminary round, his 2 homers tied Bryan Engelhardt, Chih-Sheng Lin, Weglarz and Alfredo Despaigne for second, one behind Dae-ho Lee.

Saunders was terrific as the starting RF for Team Canada in the 2013 World Baseball Classic. Even though Canada lost two of its three games, Saunders was named the MVP of the first-round pool with a mind-boggling batting line of .727/.769/1.273 with 7 RBI. He was also named to the all-tournament team as an outfielder. Playing for the Mariners that year on July 20th, he had the only hit for his team in a game against the Houston Astros and was the hero of a unlikely 4-2 win. Fellow Canadian Erik Bedard was on the mound for Houston and he did not allow a hit through the first 5 innings. With one out in the 6th, Saunders drew a walk, followed by another to Brad Miller, advanced to third on a passed ball and scored on a sacrifice fly by Nick Franklin for his team's first run; Miller scored on another passed ball to tie the score at 2-all, with Seattle still looking for its first hit. In the second, the M's were still hitless when Saunders came to bat again, with two on and two outs, both runners having reached on walks. Bedard had left, having reached his pitch count limit and Saunders greeted reliever Jose Cisnero with a double to the hill in the deepest part of center field at Minute Maid Park; it scored both runners and turned out to be his team's only hit of the game as they were shut down by two other relievers the rest of the way. he played 132 games that season, hitting .236 with 12 homers and 46 RBIs. While his numbers appear unimpressive at first, they were good for a solid OPS+ of 106 in the difficult offensive context of Safeco Field.

Michael had his best season in 2014 - except for the fact that he was limited to 78 games by various injuries. When he did play,m he was good, hitting .273/.341/.450 with 8 homers and 34 RBIs, good for an OPS+ of 128, easily the best of his career. While his production was satisfying, his inability to stay healthy was a problem for a Mariners team that felt it was on the verge of contention. With a surplus of outfielders on hand, they decided to trade him to the Toronto Blue Jays on December 3rd, in return for starting pitcher J.A. Happ. In Toronto, with the expected departure of free agent LF Melky Cabrera, he had the inside track for a starting job in the outfield for a team that was going all in to make a run at the World Series in 2015. However, during the first week of spring training on February 25th, he stepped on a sprinkler while shagging fly balls in the outfield and tore cartilage in his knee. The original prognosis was bleak, putting him out of action until July, but after he underwent surgery, the team was more optimistic, saying he could be back by the end of April. He was sent down to the Class A Dunedin Blue Jays on a rehabilitation assignment on April 9th. The Blue Jays activated him on April 25th. When he made the starting lineup alongside Russell Martin and Dalton Pompey, it was the first time three Canadians started in a MLB game together. However, he only played 9 games for the Jays before heading back to the DL for the remainder of the season. He hit .194 with no extra-base hits during that short stretch.

Saunders was back in full health in 2016, however, and a starting job was awaiting him as Ben Revere, who had played left field during the stretch run the previous season, had left via free agency. Saunders started off hot and continued that way, as by mid-June he was hitting above .300 with home runs in double figures. Then, on June 17th, he had a career game against the Baltimore Orioles, hitting three homers and driving in eight runs to lead the Jays to a 13-3 win. He started off his night's work with a three-run homer off Mike Wright in the 1st, added another three-run shot off Wright in the 4th and then connected against Ubaldo Jimenez with a man on in the 6th. He had All-Star-type numbers at the end of the first half, but was not among the initial list of players selected to the American League squad. Instead, he won the Final Man Vote to earn his spot. He slumped during the second half of the season, but still finished with the best numbers of his career: 140 games, a .253 average, 24 homers, 70 runs and 57 RBIs. Due to his second-half slump, he was confined to part-time DH duties in the postseason, with veteran back-up Ezekiel Carrera starting in left. He still had a few highlights in those games, including doubling and scoring a run in two at-bats in the Wild Card Game against the Baltimore Orioles on October 4th, in his first career postseason game, and homering off the Cleveland Indians' Dan Otero in a losing cause in Game 3 of the 2016 ALCS. Overall, he went 8 for 21 (.381) in 8 games. His 24 dingers were a record for a Blue Jay born in Canada, but lasted only five years before Vladimir Guerrero Jr. broke it.

Saunders became a free agent after the 2016 season and on January 16, 2017, it was reported that he had reached a deal with the Philadelphia Phillies for one year at $9 million, with an option for the following season at $11 million. He did not last long in Philly however as he was released on June 20th after hitting .205 in 61 games, with 6 homers and 20 RBIs. The Phillies were playing poorly and were looking to get rid of veterans in order to give some younger players a look. A week later, he signed a minor league deal back with the Blue Jays organization. He came back to the Jays late in the season, playing 12 games during which he hit .167 with no extra base hits. On February 21, 2018, he signed a minor league deal with the Pittsburgh Pirates but stayed with the team only two days, as he asked for and received his release when the Bucs acquired OF Corey Dickerson in a trade, greatly diminishing his chances of making the team. He then signed another deal with the Kansas City Royals on February 24th but was released again at the end of spring training. On April 2nd, he joined his third team in six weeks, signing a minor league deal with the Baltimore Orioles who assigned him to the AAA Norfolk Tides. He hit just .161 in 31 games for Norfolk, was released again on May 15th, then signed with the Chicago White Sox but hit only .152 in 13 games for the Charlotte Knights and was released one more time on June 21st. he seemed to have reached the end of the road at that point, but on January 1, 2019, he signed a minor league deal with the Colorado Rockies with an invitation to spring training. This effort did not last long as he was released for the last time on March 18th.

The Atlanta Braves hired Saunders to manage the Danville Braves in 2020 before COVID-19 caused the minor league season to be cancelled. He managed the Augusta GreenJackets in 2021.

Saunders was given the nickname "The Condor" by Mariners coach Lee Tinsley.