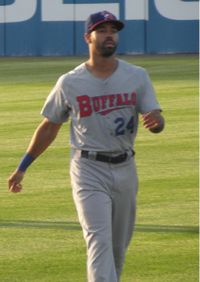 OF Dalton Pompey had a great game during his first taste of the majors with the Toronto Blue Jays at the end of the 2014 season. On September 26th against the Baltimore Orioles, he went 3 for 4 with two triples and a double, and 2 RBIs in a 4-2 win. Those were both his first big league double and triple. Not content to contribute with the bat, he also made a great diving catch along the left field line in the 2nd inning. A few days earlier, on September 23rd, he had hit his first career home run against Felix Hernandez of the Seattle Mariners.

Pompey was drafted by the Blue Jays in the 16th round of the 2010 amateur draft, out of high school in the suburbs of Toronto. He was a relative late bloomer, not developing into a potential professional baseball until his senior year of high school. He signed quickly and was only 17 when he made his professional debut with the GCL Blue Jays that year, hitting .191 in 11 games. Back with the same team in 2011, he played regularly, with 42 games in the Gulf Coast League and 18 more in the Appalachian League with the Bluefield Blue Jays, hitting a combined .239/.358/.367. He was then slowed down by injuries in 2012, playing only 20 games split among three levels - Bluefield, the Vancouver Canadians of the Northwest League and the Lansing Lugnuts of the Midwest League. He did pretty well in his limited time, hitting .286/.375/.429.

Dalton made the Blue Jays' starting line-up on Opening Day in 2015, filling in for an injured Michael Saunders, a fellow Canadian. He spent all of April with Toronto, starting first in centerfield and then in left field, but was sent back to the minors on May 1st after hitting .193 in 23 games. He hit .351 in 31 games for New Hampshire before heading back to AAA Buffalo, where his average was .285 in 65 games. Overall, his minor league batting line was .307/.383/.421 in 96 games, with 70 runs scored and 23 RBIs. He came back to Toronto when rosters expanded in September and was mainly used as a pinch-runner with the Jays locked in a pennant race with the New York Yankees. He finished the year at .223 in 34 games, with 2 homers and 6 RBIs. However, his career stalled in the upper minors after that: he had only 2 at-bats in the majors in 2016, did not play at all in the Show the next year, and in 2018 was only up for 5 games, during which he hit .200. He was passed by a number of other outfielders on the depth chart during those years, including Dwight Smith Jr., Anthony Alford, Jonathan Davis, Teoscar Hernandez and Billy McKinney, who all received more opportunities to show their abilities at the major league level than he did.

His younger brother, Tristan Pompey, was an outfielder with the Canadian Junior National Team in 2015 when they played the Blue Jays in an exhibition game in Dunedin, FL on March 15th. Because there is a five-year difference between them, the two brothers had never played in the same game before and their parents were on hand to witness the event. Dalton started the game in center for Toronto and Tristan in left for the Canadian junior squad; in an ironic twist, Dalton flied out to his brother to lead off the 1st inning.