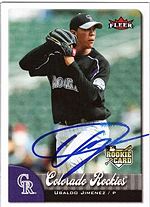 Ubaldo Jimenez pitched six seasons for the Colorado Rockies before being traded; he holds the team's single-season record for wins.

Ubaldo had a fine 2003 season for the Asheville Tourists, going 10-6 with a 3.46 ERA and a .229 opponent average. He made one appearance with the Visalia Oaks, hurling five innings of 3-hit, 1-walk ball, striking out seven and earning the victory. Jimenez had a 4-1, 2.23 record in 9 starts for the 2004 Oaks, allowing 29 hits in 44 1/3 IP while striking out 61, but a posterior right shoulder strain sidelined him most of the season.

For the Dominican national team in the 2009 World Baseball Classic, Jimenez got the start in a make-or-break game against the Dutch national team, which had beaten the Dominicans previously. He struck out 10 in four shutout innings before giving way to Pedro Martinez. In the process, he set a new World Baseball Classic record for strikeouts in a game, surpassing Koji Uehara's 8 in 2006. The Dominicans went on to lose the game 2-1, though. He went to have his best season for the Rockies in 2009, posting a 15-12 record in 33 starts, with a 3.47 ERA and 198 strikeouts as the Rockies clinched the National League wild card. He started two games in the NLDS but was charged with a loss in the series opener as the Rockies lost in four games to the Phillies.

On April 17, 2010, Jimenez pitched the first no-hitter in Rockies history, blanking the Atlanta Braves 4-0 at Turner Field. He continued to do well in his next start, pitching 7⅓ scoreless innings in a 2 - 0 win over Washington at Nationals Park on April 22. He was named the Pitcher of the Month in the National League after going 5-0, 0.71 in April. For good measure, he then won his next start to become the first 6-game winner in the majors. He continued to shine through mid-May, going 8-1 with a 0.99 ERA after 9 starts. Only two major leaguers had won 8 of their first nine starts with an ERA under 1 since 1962 - Juan Marichal (1966) and Fernando Valenzuela (1981). When he started 13-1, he matched Roger Clemens for the best start by any hurler since Lefty Gomez in 1932. His 15-1 record was the best before the All-Star Game of any pitcher with 15+ decisions, breaking Don Newcombe's record of 14-1 in 1955. He slowed down a bit over the second half, but still finished 19-8, the most wins ever by a Rockies pitcher; his .704 winning percentage was the best in the National League. With an ERA of 2.88, he was the last Rockies starting pitcher to post a sub-3.00 ERA until Kyle Freeland in 2018.

Jimenez struggled in the early going in 2011, taking a number of weeks to earn his first win on June 1st. He was 6-9 on July 30th when the Rockies took him out in the 4th inning of a start against the San Diego Padres. They then announced he had been traded to the Cleveland Indians in return for four young players - Ps Drew Pomeranz, Alex White and Joe Gardner and 1B Matt McBride. He was considered one of the prize catches at the trading deadline, and the Rockies were able to get a very good haul of prospects in return for their ace. He made 11 starts for the Indians, but his results were a disappointing 4-4, 5.10, to finish the year with a combined record of 10-13, 4.68, a far cry from his breakout season.

On April 1, 2012, Jimenez plucked former teammate Troy Tulowitzki on the wrist in the 1st inning of a Cactus League game. Both benches emptied and Tulowitzki had to be removed from the game, although x-rays proved negative. There had been bad blood between the two earlier, when Jimenez had criticized the Rockies for not offering him a long-term contract the previous season, and Tulowitzki had countered that Jimenez should have concentrated on pitching instead of running his mouth. Jimenez was handed a five-game suspension, to be served at the beginning of the regular season, for what was widely seen as an intentional gesture in spite of Ubaldo's denials. Because he initially appealed the suspension, Ubaldo was able to make his first start of the season as scheduled facing the Toronto Blue Jays on April 7th, and it was a good one. He only gave up a single hit over 7 innings, although that single by Brett Lawrie with 2 outs in the 7th drove in a pair of runs that tied the game. The Indians went on to lose the game in extra innings, and Jimenez then withdrew his appeal of the suspension, choosing to serve it starting the next day. His season was quite a disappointment, however, as he went 9-17, 5.40, his 17 losses leading the American League.

Jimenez's first season with the Orioles in 2014 was a bust. The Birds won the AL East title by a wide margin, but he contributed little, going 6-9, 4.85 in 25 games, including 22 starts; not surprisingly, he was not used in the postseason. In 2015 he bounced back to some extent, but the Orioles fell back into the pack. On September 22nd, he earned the 100th win of his career by notching his 12th victory of the campaign, 4-1 over the Washington Nationals. He finished the year at 12-10, 4.11 with 184 innings, a significant improvement over his previous season. The Orioles missed the postseason that year, but not in 2016. It was not because of Ubaldo's contributions, however, as he had a very poor year, going 8-12, 5.44. He did record what would be the only save of his career, but generally there were no highlights. And then came the Wild Card Game, against the Toronto Blue Jays on October 4th. Obviously, he did not start it - that assignement went to Chris Tillman. But Tillman could not get out of the 5th inning, so the Orioles' bullpen was summoned early with the score tied 2-2 from that inning forward. As the game went into extra innings, manager Buck Showalter had fewer and fewer options left - but he still had not used his closer, Zack Britton, who had just completed one the greatest seasons ever by a relief pitcher. But Showalter wanted to keep Britton in reserve to save the game if his team ever took the lead, so having already used five relievers, he called on Jimenez to pitch in the 11th, with the score still 2-2 and one out. He faced three batters and retired none: Devon Travis singled, Josh Donaldson singled as well, advancing Travis to third, then Edwin Encarnacion crushed a pitch into deep left field for a three-run homer. The Orioles' season was over, and Showalter was widely panned for never using Britton when everything was on the line, hanging on to the fallacy that he could only be brought out in a save situation.

Ubaldo's final season with the Orioles in 2017 was even worse than his poor 2016 had been. He made 25 starts in 31 appearances, but finished at just 6-11, with a bloated ERA of 6.81, which was over a full run worse than his previous low. He led the American League in earned runs allowed and gave up 10.7 hits per 9 innings. He was clearly done at age 33, and never pitched in the big leagues again.