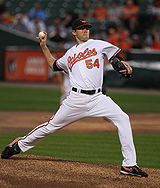 Chris Tillman had a promising 2007, his first full minor league season, and made his major league debut with the Baltimore Orioles in 2009.

Tillman was rated as the top prospect in the California high schools by Baseball America entering 2006. A rocky senior season led to his falling to the 49th pick of the 2006 amateur draft, when he was chosen by the Seattle Mariners. Signed by scout Tim Reynolds, the second-round selection debuted with the AZL Mariners and was 2-0 with a save and a 0.82 ERA; in 11 innings, he struck out 16. Promoted to the Everett AquaSox, he was a miserable 1-3, 7.78. In 19 2/3 innings, he allowed 25 hits, 15 walks and 3 wild pitches, but did strike out 29.

In 2007, Tillman showed very good progress. He was 1-4 with a 3.55 ERA for the Wisconsin Timber Rattlers and 6-7, 5.26 for the High Desert Mavericks but averaged over a strikeout per inning and led Mariners prospects with 139 strikeouts. Baseball America rated him as the #3 prospect in the California League, behind Justin Upton and Henry Sosa and a slot ahead of Matt Antonelli. He was named the Mariners minor league pitcher of the year.

That winter, Tillman was traded with Adam Jones, George Sherrill, Tony Butler and Kam Mickolio to the Baltimore Orioles for Erik Bedard. He made his major league debut for the Birds a year and a half later.

Chris spent 2008 with the Bowie Baysox, posting a 11-4, 3.18 record and .227 opponent average and striking out 154 in 136 innings. He finished fifth in the Eastern League in ERA, between Jon Niese and Brad Bergesen and was second to David Hernandez in strikeouts. Baseball America ranked him as the second-best EL prospect, right behind teammate Matt Wieters.

Tillman began 2009 with the Norfolk Tides, going 8-6 with a 2.70 ERA and 99 K in 96 2/3 IP. He was 4th in the International League in ERA. He was then called up to replace the injured Rich Hill. He had a rough MLB debut. After retiring his first four opponents, he gave up a homer to Alberto Callaspo. An out later, Miguel Olivo went deep. Overall, he served up 3 homers, 7 hits and 3 runs in 4 2/3 IP in taking the loss against Zach Greinke and the Kansas City Royals. He made 12 starts for the O's, going 2-5, 5.40 while striking out 39 in 65 innings.

Now at a career crossroads, Chris returned to Norfolk for the fourth straight season at the start of 2012, and had a very solid first half there, with a record of 8-8, 3.63. The Orioles brought him up for one start on July 4th, and he had one the best performances of his major league career, keeping the Seattle Mariners off the scoreboard over 8 innings before tiring in the 9th. He ended up with a 4-2 win, and while he was sent back to Norfolk because of the upcoming All-Star break, it was with the promise of returning to the Show after the mid-season break. But his first start for the Birds after the break was one to forget, as he failed to get out of the 1st inning against the Minnesota Twins on July 16th, giving up 7 runs in two-thirds of an inning before giving way to Miguel Socolovich; only one of the runs was earned though, as 1B Mark Reynolds committed a key error, allowing a ground ball to skip by him with two outs and the bases loaded to open the floodgates. The O's eventually lost the game, 19-7. Tillman settled down after that, and was a very good 7-2, 3.26 after 10 games when he had to leave a key start against the New York Yankees on September 2nd, complaining of stiffness in his elbow. He pitched his best game as a major leaguer on September 28th, giving up a single hit an an unearned run in 8 innings as the Orioles beat the Boston Red Sox, 9-1. It was another key game for the Orioles, who were only one game behind of the AL Est-leading Yankees with a week to go in the season. He finished the season 9-3 with a 2.93 ERA (144 ERA+).

On July 18, 2015, facing the Tigers, he pitched perhaps the best game of his career. It started normally enough, as he gave up a lead-off single to Ian Kinsler and walked Victor Martinez later in the 1st inning, but he then retired 23 straight batters before exiting the game after 8 innings. Zach Britton then added a hitless final inning to complete the combined the one-hitter as the Orioles prevailed, 3-0. He went 11-11, 4.99 in what was an off-year for him, but bounced back in 2016. That year, he was 16-6, 3.77 in 30 starts and 172 innings as the Orioles made it back to the postseason as the second wild card team in the AL. Tillman was tabbed to start the Wild Card Game on the road against the Toronto Blue Jays on October 4th, but he lasted just 4 1/3 innings, being removed after giving up a hit to Ezequiel Carrera that tied the game at 2-2. Mychal Givens replaced him and induced an inning-ending double play, then the game was not decided until the 11th inning, when Ubaldo Jimenez, the Orioles' 7th pitcher, gave up a three-run walk-off homer to Edwin Encarnacion.

Big things were again expected of Tillman in 2017, but it turned out to be a nightmarish season for him, as he struggled with a shoulder injury and won just one game in spite of making 19 starts and pitching 24 games. His record was a paltry 1-7, 7.84 and he logged just 93 innings, giving up 125 hits and 51 walks. The Orioles sank to the bottom of the standings in the AL East, in large part because of a lack of consistent starting pitching. He became a free agent after the season, but given his recent struggles found little interest and on February 20, 2018, he re-signed with the O's on a one-year deal guaranteeing him $3 million. The Orioles still had few healthy starting pitchers in camp as spring training opened, so there was definitely an opportunity for him to regain his spot.