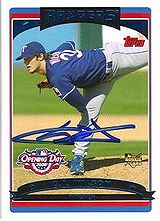 C.J. Wilson was drafted by the Texas Rangers in the 5th round of the 2001 amateur draft. He was signed by scout Tim Fortugno and made his pro debut that summer. Wilson missed the 2004 season after Tommy John surgery the previous August.

After spending his first five seasons in the major leagues as a reliever, Wilson became a starting pitcher for the Texas Rangers in 2010 and was immediately successful in his new role, winning 15 games and pitching over 200 innings with a 3.35 ERA. He continued in the same vein in 2011, going 9-3, 3.20 over the first half. That performance earned him a spot on the All-Star team; in the game, he gave up a three-run homer to Prince Fielder in the 4th inning, after Carlos Beltran and Matt Kemp had opened the inning with consecutive singles. He settled down after that, but the deed had been done, and he was charged with the American League's 5-1 loss. He finished the year with an excellent record of 16-7, 2.94, with 206 strikeouts in 223 1/3 innings. He struggled in the postseason, however, losing a game in all three rounds of the playoffs as the Rangers returned to the World Series, while not winning a single one of 5 starts. In the World Series' loss to the St. Louis Cardinals, his ERA was good at 2.92, but he walked an uncharacteristic 11 men in 12 1/3 innings.

In spite of his postseason struggles, he was one of the most sought-after free agent pitchers in the off-season. He signed with the Los Angeles Angels of Anaheim on December 8th, the same day as Albert Pujols, agreeing to a 5-year deal worth $77.5 million. In his first season with the Angels, in 2012 he was an All-Star again as he went 13-10, 3.83 while making a league-leading 34 starts and 202 1/3 innings. He had an even better year in 2013, when his record was a sparkling 17-7, with an ERA of 3.39. he again pitched over 200 innings - 212 1/3 - and struck out 188 opponents. However, in spite of OF Mike Trout's emergence as the best young player in the game those two seasons (he won the Rookie of the Year Award in 20912 and finished second in the MVP voting both years), the Angels disappointed, as they failed to make the postseason in either season. In 2014 however, they were able to put it all together during the regular season, finishing with the best record in the American League. Ironically, it was C.J.'s least effective season since being made a starting pitcher, as his ERA shot up to 4.51, although the Angels' strong hitting left him with a record of 13-10. But other indicators were down: only 175 2/3 innings for someone who had been a consistent workhorse in previous years, an ERA+ of only 80 and a league-leading 85 walks issued. He started Game 3 of the ALDS against the Kansas City Royals on October 5th with Los Angeles facing elimination, but he did not make it out of the 1st inning, giving up three runs as the team's season came to an abrupt end. He was pitching somewhat better in 2015, with a record of 8-8, 3.89 after 21 starts, when his season ended on August 13th, as the Angels announced that he would undergo surgery to remove bone spurs in his left elbow. He had been placed on the disabled list on July 31st with was simply described as inflammation at the time.

Injuries completely wiped out C.J.'s 2016 season. He began to feel discomfort in his left shoulder in spring training. He tried to rest the shoulder, but saw no improvement and in early July, he decided to undergo surgery, precluding any hope of returning that year. As it was the final season of the contract he had signed in 2011, it meant that his time as a member of the Angels was also over. At that point, he announced that he would concentrate his attention on some of his other projects, such as automobile dealerships he owned in Fresno, CA and C.J. Wilson Racing, a sports car team. He did not entirely write off the possibility of returning to pitching at some point, however, but stated that it was extremely unlikely. On March 16, 2017, he competed in his first major race, the "Mobil One 12 Hours of Sebring", an endurance race held at the legendary Sebring, FL racetrack and part of the International Motorsports Association series, driving a Porsche 911 GT.