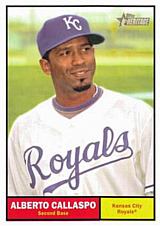 Alberto Callaspo played ten seasons in the bigs with six teams. In 155 games with the 2009 Kansas City Royals, he enjoyed a .300 season at the plate.

Callaspo signed as a free agent with scouts Carlos Porte and Amador Arias out of Venezuela for the Anaheim Angels in 2001. He began his professional career with the DSL Angels, hitting .356, third in the league, and tying Ricardo Santiago for the league lead with 98 hits. He slugged .447, stole 14 bases and scored 55 times, making the league's All-Star team at shortstop. Promoted to the Provo Angels in 2002 and moved to second base, Alberto batted .338/.374/.488 with 10 triples and 70 runs scored in 70 games. He earned All-Star honors once more, leading the Pioneer League in runs scored, triples and hits (101), was fourth in average and led second basemen in putouts (134), assists (207), double plays (93) and fielding percentage (.972). A teammate of author Matt McCarthy, Callaspo was featured briefly in his memoir, Odd Man Out, in a few bizarre incidents, chief among them becoming unusually excited for coach Tom Kotchman to put the box office bomb Pootie Tang on during a bus trip, humping the back of a bus chair in delight while chanting POO-TIE, POO-TIE.

Callaspo moved on up to the Cedar Rapids Kernels for 2003 and continued to hit (.327/.377/.428 with 20 steals in 26 tries, 38 doubles and 86 runs scored). He drew 42 walks while striking out just 28 times in 514 at bats. Baseball America rated him the 7th-best prospect among second basemen and Midwest League managers picked him the 11th-best prospect in the league. He led the MWL in average, runs scored and hits (168), making the All-Star team at second base. In three seasons, he had made the All-Star team and led his league in hits every season. Next on his travelogue: the Arkansas Travelers, 2004, hitting .284/.338/.376 with disappointing results on the bases (only 15 for 29 in steals). Moved back to shortstop, he led Texas League shortstops with 200 putouts and had the most at bats in the league (550). Managers picked him 10th-best prospect in the league and Baseball America rated him the #10 shortstop prospect. In 2005, Callaspo returned to the Travelers and hit .297/.346/.406 as the All-Star second baseman. Making it to AAA, he hit .316/.345/.448 in 50 games for the Salt Lake Stingers.

On March 1, 2006, Alberto was traded to the Arizona Diamondbacks for reliever Jason Bulger and assigned to the Tucson Sidewinders. He hit .336 with 12 triples, 5 homers, and 61 RBI in 104 games. He finished 7th in the US-based minors in average and Baseball America rated him possessing the best strike zone judgment and the best defensive second baseman in the Pacific Coast League. He made another All-Star team and won the PCL batting title; James Loney hit .380 but it dropped to .336 when one added enough plate appearances for him to qualify, placing him behind Callaspo. In August, he got the call to The Show, making his big league debut on August 6th. In limited time (23 games + 42 at bats), he hit .238.

In 2007, Callaspo struggled, only batting .215/.265/.271 in 56 games for the Diamondbacks, though he hit .341/.406/.491 in 59 games for Tucson. He also had off-the-field issues. He was arrested and charged with misdemeanor assault following a disagreement with his wife and was suspended for a period. In the Venezuelan Winter League, Callaspo hit .331/.394/.422 to finish fourth in average behind Jose Castillo, Gregor Blanco and Eliezer Alfonzo. Callaspo batted .346/.414/.385 for the Tigres de Aragua in the 2008 Caribbean Series, one of the few MLB-experienced players who did not leave the team after the Venezuelan season ended. He was traded to the Kansas City Royals for Billy Buckner on December 14, 2007. He showed something with the bat for the first time on a big league level, hitting .305/.361/.371 in 72 games, then was given the keys to the second base kingdom in 2009. It proved his best season as a big leaguer, hitting .300/.356/.457 while establishing career highs in just about every conceivable offensive category: home runs (11), RBI (73), runs scored (79) and hits (173).

Alberto did not get off to quite the same start in 2010 and was re-acquired by the now Los Angeles Angels in July for future All-Star Will Smith and Sean O'Sullivan. He muddled through the remainder of the year (.249/.291/.315 in 58 games) then held down third base the next two seasons, failing to raise his slugging percentage above .400 despite a .288 season in 2011. On July 30, 2013, the Angels traded him to the Oakland Athletics for Grant Green. Even with all the moving, Callaspo managed to have at least 500 plate appearances in five consecutive seasons, from 2009 to 2013. Following his trade to the A's, he became a sort of super utility player and in 2014 played 127 games divided between second base, DH, first base and third base. He hit only .223, scuffling while showing ill effects as his weight began to go up. After going 1 for 6 in the 2013 Division Series against the Detroit Tigers, he did not start the 2014 Wild Card Game against his former team, the Royals, but was successful in a pinch-hit appearance in the 12th inning, singling against Jason Frasor to drive in Josh Reddick from third base with the go-ahead run. He would have been the game's hero, except the A's were unable to hold the lead in the bottom of the inning, giving up two runs as the Royals came out on top, 9-8.

On December 9, 2014, Callaspo signed with the Atlanta Braves for one year and $3 million, pending a physical exam. He was considered a potential starter at second base but played only 37 games for the Braves in 2015, seeing most of his action at third base and hitting .206. He was traded to the Los Angeles Dodgers on May 27th and originally blocked the trade, as was his right as a player having signed as a free agent during the offseason. He changed his mind after thinking about it for a day and moved along with pitchers Juan Jaime, Eric Stults and Ian Thomas while third baseman Juan Uribe and pitcher Chris Withrow went the other way. In L.A., he was a backup infielder, as the purpose was to give more playing time to Justin Turner and rookie Alex Guerrero at third base. He hit .260 in 60 games in what turned out to be his final season in the majors; he was released at the end of August, missing a chance to return to the postseason. He kicked around the fringes of organized baseball, last playing in the Mexican League in 2018.

Callaspo was a bit of a throwback, a switch-hitter whose main strength was making contact and rarely striking out. He was by no means a slap hitter, as he hit 10 homers in a season four times and as many as 41 doubles in a season - although that was a one-year aberration, since he more often hit around 20 doubles. He also had less speed than would be expected, with a career high of 8 stolen bases, and did not hit any triples from 2011 to 2014.