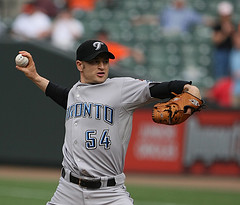 Jason Frasor was a reliever who holds the record for most games pitched for the Toronto Blue Jays.

After attending Southern Illinois University, where he studied speech communications, Frasor was selected by the Detroit Tigers in the 33rd round of the 1999 amateur draft. Originally a starter, he started 29 games in the Tigers chain in his first two pro seasons but missed the entire 2001 campaign with an elbow injury. He came back in 2002, going 5-6 with a 3.54 ERA in 24 starts for the Lakeland Tigers. At the end of that season, he was dealt to the Los Angeles Dodgers to complete an earlier trade for Hiram Bocachica. The Dodgers converted him to a reliever in 2003, and he started the year by recording 6 saves and posting a 1.85 ERA in 15 games for the Vero Beach Dodgers. In late May, he was promoted to the AA Jacksonville Suns, for whom he saved 17 games in 17 chances and set a Southern League record for consecutive saves.

Prior to the 2004 season, Frasor was traded again, sent to the Toronto Blue Jays for Jayson Werth. He started the 2004 campaign with the AAA Syracuse SkyChiefs, but after just 3 appearances, he was promoted to Toronto for the remainder of the season. He led major league rookie pitchers in appearances that summer while recording 17 saves. The next year he was moved to set-up duty and went 3-5 with a 3.25 ERA in 67 outings. After putting up a 10.24 ERA in 9 April games in 2006, he was sent down to AAA Syracuse for two stints during the season, but still managed to get into 51 games for the Jays.

In 2011, Frasor played in his 453rd game for Toronto, breaking the club record previously held by Duane Ward. After getting into 455 games with the Blue Jays during his career, he was traded to the Chicago White Sox along with Zach Stewart in return for Edwin Jackson and Mark Teahen on July 27th. He had been 2-1, 2.98 in 44 games for Toronto, but with Chicago, his ERA shot up to 5.09 in 20 games, with a record of 1-2; he did not record a save all year. His stay with the White Sox was short-lived; on January 1, 2012, Chicago sent him back to Toronto in return for two minor leaguers, Myles Jaye and Daniel Webb.

He went 1-1, 4.12 with no saves in 50 games for the Blue Jays that year, bringing his franchise-leading total of games pitched to 505. After the season he became a free agent again but chose not to stay in Toronto, in spite of the team's moves to acquire a number of front-line players aimed at making it a contender in the AL East for the first time in years. Instead, on January 3, 2013, it was announced that he had signed with the Texas Rangers for one year and $1.5 million.

He went 4-3, 2.57 in 61 appearances with the Rangers in 2013. After going 1-1, 3.34 in 38 games with Texas in the first half of the 2014 season, he was traded to the Kansas City Royals on July 16th in return for minor league P Spencer Patton; injuries had destroyed any hopes the rangers had of competing that season, while the Royals were looking to make a second-half push to return to the postseason after an absence of almost three decades. He was spectacular with the Royals, going 3-0, 1.53 in 23 games as they did reach the postseason. Jason was a key contributor in the team's run to the seventh game of the 2014 World Series, as he was the winner of the Wild Card Game over the Oakland A's and won another game in the ALCS against the Baltimore Orioles. Overall he had a 1.67 ERA in 7 appearances in his first taste of the postseason at the age of 36. On November 28th, the Royals re-signed him to a one-year contract worth $1.8 million.

As of the end of 2014, Frasor was the leader among active major leaguers in games played without a plate appearance as a batter.