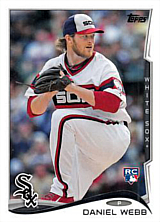 Daniel Webb was a Chicago White Sox pitcher who made his major league debut in 2013.

Webb was first drafted out of high school by the Arizona Diamondbacks in the 12th round of the 2008 amateur draft, but did not sign. In the 2009 draft, after one year in junior college, he was selected by the Toronto Blue Jays in the 18th round. This time, he accepted the offer to turn pro and was signed by scout Joel Grampietro. He began his playing career the following year, in 2010, splitting his season between the Auburn Doubledays of the New York-Penn League and the Lansing Lugnuts of the Midwest League. He was 0-6 with a 5.24 ERA in 13 starts in the NYPL, but did better at the higher level, going 1-1 with a 2.31 ERA in his two starts for Lansing. In 2011, he started the season late because of an injury, and made a brief stay with the GCL Blue Jays before rejoining Lansing. He made 12 starts in 18 appearances, but with mediocre results: 4-5, with a 5.59 ERA, 51 strikeouts and 24 walks in 66 innings. In spite of his unimpressive results so far, he was acquired by the White Sox, along with another low-level pitcher, Myles Jaye, in return for veteran reliever Jason Frasor on January 1, 2012.

Webb spent the 2012 campaign with the Kannapolis Intimidators, struggling to a 1-8 record and a 5.81 ERA. He was moved to the bullpen in 2013 and improved vastly, going 2-1 with a 3.08 ERA and 10 saves in three different minor league stops. That performance earned him a September call up to Chicago, and he made his big league debut on September 4, recording a scoreless inning of relief work against the New York Yankees. He posted a 3.18 ERA in 9 relief outings for the Sox while striking out 10. He made Chicago's Opening Day roster in 2014 White Sox and remained with the club all season, going 6-5 with a 3.99 ERA and 58 strikeouts in 57 appearances. Despite a relatively successful rookie campaign, he started 2015 with the Triple A Charlotte Knights before returning to the White Sox in late May. He missed most of August with a back injury and ended the year with a 1-0 record and 6.30 ERA in 27 games for Chicago. Tommy John surgery limited his 2016 campaign to just 8 games, and he was released by the Sox following the season.

In 2017, Webb was killed in an ATV accident that also seriously injured his wife. He was 28 years old.