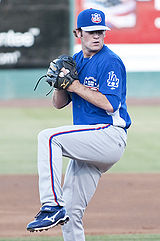 The son of Mike Withrow, pitcher Chris Withrow was a first-round pick who took six years to make the majors.

He was selected by the Los Angeles Dodgers in the first round of the 2007 amateur draft (the 20th overall pick, compensation for the loss of Julio Lugo to free agency). It was LA's first pick that year, between J.P. Arencibia and Joe Savery. He had gone 8-1 with a 1.32 ERA as a high school senior. He was signed by scout Calvin Jones for $1.35 million and made his pro debut that season with the GCL Dodgers. He played his first game on July 7th against the GCL Marlins, pitching 1 1/3 scoreless innings and allowing two hits, and overall for the year, he posted a 5.00 ERA in 6 outings. Baseball America named him as LA's #6 prospect entering 2008 but he only pitched four games that year for the Inland Empire 66ers, presumably due to injury (2 H, 2 R, 6 BB).

Chris split 2009 between the 66ers (6-6, 4.69, 105 K in 86 1/3 IP) and Chattanooga Lookouts (2-2, 3.95, 26 K in 27 1/3 IP). He also hit his first career home run. He was second in the Dodgers chain in whiffs, behind Giancarlo Alvarado. Baseball America listed him as the #4 prospect in the California League (behind Buster Posey, Christian Friedrich and Jason Castro), as #2 in the LA system (behind Dee Gordon) and as #48 in all of the minor leagues. In 2010, Chris slumped to 4-9, 5.97 for Chattanooga. He was 4th in the Dodger chain in whiffs (120) but second in walks (69), third in earned runs (69), third in runs (92) and tied for 8th in losses. In the Southern League, he tied Tommy Layne for 5th in hits allowed (146), was second to Steve Bray in runs surrendered, led in earned runs allowed, tied Mark Rogers and Erik Cordier for second in walks and tied Mauricio Robles for fourth in Ks. Baseball America ranked him as the #11 prospect in the SL, between Matt Dominguez and Alex Torres.

Withrow made his debut on June 12, 2013 in a 10-inning, 8-6 loss to the Arizona Diamondbacks, the second of seven Dodger hurlers. He entered in the 7th with a 4-3 lead and struck out A.J. Pollock on three pitches. Gerardo Parra lined out but things turned sour as Paul Goldschmidt, Cody Ross and Miguel Montero all singled to tie the game at 4. After a four-pitch walk to Martin Prado, he was relieved by Paco Rodriguez, who ended the rally.

On May 27, 2015, he was traded to the Atlanta Braves along with 3B Juan Uribe in return for IF Alberto Callaspo and Ps Juan Jaime, Eric Stults and Ian Thomas.

In addition to his father playing in the minor leagues, his brother Matt Withrow was a 6th-round choice in the 2015 amateur draft by the Atlanta Braves.