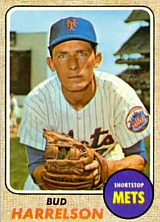 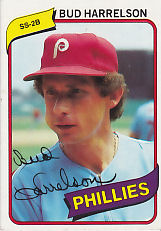 Shortstop Bud Harrelson played sixteen years in the majors, primarily with the New York Mets, and was an All-Star and Gold Glove winner. Following his playing days, he managed the Mets for a season and a half, and is currently part owner of the Long Island Ducks of the independent Atlantic League.

Harrelson played college ball at San Francisco State University and is one of three major leaguers to come out of the school (contemporary Tommy Harper is one of the others). He was signed by scout Roy Partee for the Mets in 1963, reached the majors with the team as a September call-up in 1965, and became the club's regular shortstop in 1967. The Mets unexpectedly won the NL East crown in 1969, and although he hit under .200 in the postseason, New York won the World Series crown that October.

In 1970, Harrelson went 54 consecutive games without committing an error and was named to the National League All-Star team. He ended the year with a .243 average and career-bests with 72 runs scored and 42 RBI. The next year, he was an All-Star again and won a Gold Glove for the only time in his career. The Mets won their division again in 1973, and Harrelson was involved in a high-profile fight with Pete Rose of the Cincinnati Reds during the NLCS. New York ultimately won the series but fell to the Oakland Athletics in the World Series, despite Harrelson hitting .250 in 7 games.

After hitting just .178 for the Mets in 1977, Harrelson was traded to the Philadelphia Phillies for Fred Andrews the following spring. Following two summers with the Phillies, he ended his playing career with the Texas Rangers in 1980. In 1989, Harrelson played for St. Lucie Legends of the Senior Professional Baseball Association. He appeared in only 1 game and batted .333. In 1986, Bud was inducted into the Mets Hall of Fame.

Harrelson was a Mets coach in 1982 and after a stint managing in the minors returned to their staff in 1985. He replaced Davey Johnson as the team's manager in 1990 but remained at the helm for less than two years. He managed the independent Long Island Ducks in 2000 and has been a member of the team's coaching staff ever since then. He is also a part-owner of the club.

With several other '69 Mets, Harrelson appeared in a 1999 episode of Everybody Loves Raymond.

In 2016, Bud was diagnosed with Alzheimer's disease.