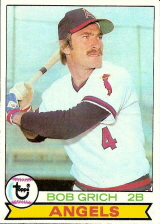 "I was short on talent so I had to be long on intensity." - Bobby Grich, reflecting on his career

Bobby Grich was a six-time All-Star during his 17-year major league career, but did not get the recognition then that he has received from the sabermetrics community in recent times.

A four-time Gold Glove winner with a career OPS+ of 125, who managed an excellent .371 OBP at a time when high walk totals were not as common as today, Grich finished as high as eighth once and ninth once in MVP voting. In the strike-shortened 1981 season, he had the highest OPS+ in the American League and tied for the league lead in home runs, yet only finished 14th in the MVP race.

Grich was a first-round pick by the Baltimore Orioles in the 1967 amateur draft. He played five seasons in the minors, hitting as high as .383 in 63 games with the Rochester Red Wings in 1970, the year he made his big league debut. The following year, 1971, he hit 32 home runs for the Red Wings but still couldn't displace Oriole veterans Mark Belanger at shortstop and Davey Johnson at second base. In 1972 he became a regular without a fixed position, getting over 500 plate appearances while rotating around the infield. Johnson was dealt to the Atlanta Braves after the season to make room for Grich.

Grich played for Baltimore through 1976, then was one of the prominent first round of re-entry free agents after that season, signing with the California Angels, where he stayed until retiring following the 1986 season. He was an All-Star three times with each team, in 1972 as a shortstop with the O's, the rest as a second baseman.

Despite high regard among sabermetricians, only one Hall of Famer appears on his similarity scores list, World War II-era New York Yankees second baseman Joe Gordon, whose career was shortened by military service, and who did not gain entry to the Hall until three decades after his death. The most similar player is Toby Harrah, a contemporary AL infielder of similar high OBP for the era, whose bat was a notch less potent and glove could not compare, but who was a much more effective base thief.

Grich was the first inductee of the Angels Hall of Fame in 1996. Two years later, he was inducted into the Baltimore Orioles Hall of Fame.

Grich was a high school teammate of Ed Crosby. Bobby attended the same high school as Jeff Burroughs, who was two years younger.