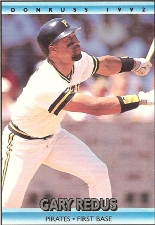 Gary Redus played 13 years in the big leagues. He had a decent on-base percentage, moderate power and stole bases well.

Redus holds the record for the highest batting average in a minor league season. In his first season in 1978, Redus hit .462 for Billings in the Pioneer League over the course of their 68 game season (Willie Aikens holds the full-season-league record, .454 for Puebla in the Mexican League in 1986). While the Pioneer League was a high-offense league that season, Redus still led by 94 points over the second-best contact hitter, teammate Skeeter Barnes. He led by 95 points in OBP, 165 points in slugging, scored 100 runs in 68 games (31 more than the #2 player), beat Barnes by 15 hits, was second in the league with 17 homers, second with 19 doubles, second with 62 walks, and led with 42 steals as he dominated the league across the board. Among the players he outperformed were Ryne Sandberg, Julio Franco, George Bell, Rob Deer, Tom Brunansky, Steve Sax and Candy Maldonado.

Despite the flashy start, it took Redus five years to reach the majors with the Cincinnati Reds. A low-average major-leaguer hitter with modest power who walked a lot, he was a thoughtful percentage player who could seem nonchalant. Redus was the antithesis of Reds manager Pete Rose and quarreled loudly with Rose over the manager's decision to play himself instead of the Reds' younger prospects in 1984 and 1985. Traded to the Philadelphia Phillies, Redus contributed to a comeback season for the Phillies in 1986 and then became a valued journeyman, playing a role on on three division-winning Pittsburgh Pirates clubs from 1990 to 1992.

The most similar player to Redus through 2006, based on the similarity scores method, is Jungle Jim Rivera.

Since his playing career ended, Redus spent six seasons (1996-2001) as baseball coach at Calhoun Community College and was a minor league outfield & baserunning instructor in the Pirates organization from 2001 to 2007. He was named minor league outfield/baserunning instructor for the Houston Astros for 2008 and continued in that role in 2009. He coached Tanner High School briefly in 2017. Redus was a coach for the Montgomery Biscuits in 2017-2019. He was scheduled to return to Montgomery in 2020 before the season was cancelled due to Covid-19 then did coach Montgomery again in 2021.