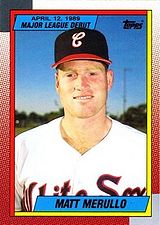 Merullo, born in Massachusetts, was a member of the 1983 USA High School Team. He attended the University of North Carolina, played in the 1985 Intercontinental Cup competition, and was drafted in the 7th round in 1986 by the Chicago White Sox.

In 1995, his last major league year, he spent the entire season with the Minnesota Twins, with whom he had signed as a free agent, appearing in 76 games and hitting .282/.335/.379. It was his highest batting average. He was the backup catcher for the Twins behind Matt Walbeck. In spite of having a good season with the bat, he did not return to the majors after that season.

In 1996, he appeared in 39 games in the California Angels and Chicago Cubs minor league organizations.

During Matt's professional career, he had to deal with one knee and three elbow operations.

He founded, and currently runs, Pro Advantage Baseball in Connecticut. He also served as an area scout for the Arizona Diamondbacks in New England, signing Evan Scribner, Michael Belfiore and Matthew Torra. He became a manager in 2013-2014 with the Aberdeen IronBirds. Merullo became an assistant coach at Fairfield University in 2022.

Rick Peterson is a close friend.

One of his proudest moments was going 2 for 2 with a couple of RBIs while facing Roger Clemens.