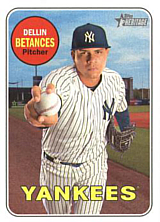 Pitcher Dellin Betances was selected by the New York Yankees in the eighth round of the 2006 amateur draft. He was signed by scout Cesar Presbott and East Region crosschecker Brian Barber for $1 million, a record for 8th rounders. Betances made his pro debut with the GCL Yankees in 2006 and reached the majors with the Yankees in 2011. He appeared twice that season, starting once, with no record and a 6.75 ERA. Originally used as a starter, Dellin was moved to the bullpen in AAA in 2013 after struggling as a starter in 2012, when he went a combined 6-9, 6.44 between the AA Trenton Thunder and AAA Scranton/Wilkes-Barre Yankees. In 2013, he was 6-4, 2.68 with 5 saves, earning a return to the Big Apple, where his ERA was 10.80 in 6 appearances.

The Yankees were not really sure what to expect in 2014, but he turned out to be a very pleasant surprise as he took over as the team's primary set-up man out of the bullpen, following the retirement of Mariano Rivera and David Robertson's promotion to closer. Dellin was outstanding during the first half, with a 4-0 record and a 1.61 ERA in his first 37 appearances. That earned him a spot at the 2014 All-Star Game when the teams were announced on July 6th. The next day, he earned his first career save, preserving a 5-3 win over the Cleveland Indians for Shane Greene, who recorded his first big league win. In September, he closed in on a team record when he recorded his 124th strikeout on September 5th, which moved him past Rich Gossage for the second-most by a reliever in Yankees history. Ahead of him was Rivera, who set the club mark with 130 in 1996. Dellin ended up setting a new team record with 135 strikeouts in 90 innings to go along with a 5-0 record, a save and an ERA of 1.40. He allowed only 46 hits and walked 24.

David Robertson left as a free agent after the 2014 season, and speculation immediately focused on Dellin to be the team's new closer and "true successor" to Mariano Rivera, Robertson having only held the job for one season. Manager Joe Girardi and General Manager Brian Cashman did not want to put too much pressure on the young pitcher and gave hints that Andrew Miller, signed as a free agent in the offseason, would share closing duties with Betances in 2015. In fact, Miller converted all of his early save chances and was formally anointed the closer in early May, even though Dellin had also pitched very well during the early going. Neither pitcher had allowed an earned run as of May 10th, a major factor in the Yankees finding themselves in first place in the AL East at that point. He finally gave up his first run on June 5th, when what looked like an insurmountable 8-1 9th-inning lead by the Yankees was threatened when the Los Angeles Angels managed to have first five batters reach base against Esmil Rogers; he came in to stop the budding fire, but allowed a single and a pair of walks. After striking out Kirk Nieuwenhuis, a run scored on Johnny Giavotella's ground out, cutting the lead to 8-6, but he ended the game by striking out Carlos Pérez and was credited with his second save of the season. On June 23rd, he suffered the first loss of his career as he entered a tie game against the Philadelphia Phillies in the 8th inning and extinguished a rally. In the 9th inning, he allowed a lead-off double and a hit batsman before giving up a two-run double to Maikel Franco, which opened the floodgates as the Phils went on to win, 11-6. A sign of how incredibly well he had been pitching was that it was the first time he had allowed multiple runs in a game since the previous April, 14 months earlier. He finished the year at 6-4, 1.50 and 9 saves in 74 games, striking out 131 batters in 84 innings.

In 2016, Betances was of three potential closers with the Yankees at the start of the year, alongside Miller and newly-acquired Aroldis Chapman. When the three were on the team, Betances was given the task of pitching the 7th inning, with Miller handling the 8th and Chapman the 9th. Despite that loaded bullpen, the Yankees were having a middling season and at the trading deadline, the Yankees decided to reload, trading both Miller and Chapman for a package of prospects. That left Betances as the closer for the final two months, but he did not do that well, finishing 3-6, 3.08 with 12 saves and 5 blown saves in 73 games. His 73 innings were the fewest he had pitched in three years, but in spite of the relatively high ERA by his lofty standards, his other rate stats remained outstanding, with 54 hits and 28 walks against 126 strikeouts. Before the 2017 season, the Yankees re-signed Chapman as a free agent, meaning Betances would be back in the role of set-up man. He went to salary arbitration that winter, requesting $5 million while the Yankees offered $3 million. The hearing was acrimonious and Betances lost, while Yankees President Randy Levine took the opportunity to criticize him harshly, claiming he had been manipulated by his agents into asking for a ridiculous salary raise in order to upset the prevailing salary structure set by previous arbitration decisions. Dellin's agents replied that Levine's tirade was unjustified and an attempt to bully the arbitration panel. Even with this setback, Dellin reached a fourth straight All-Star Game, finishing the season 3-6, 2.87 with 100 strikeouts in 66 appearances (59 2/3 innings). In 2018, he became the first relief pitcher to enjoy 5 straight 100 strikeout seasons in his first five full seasons, fanning 115 in 66 2/3 innings and finishing with a 2.70 ERA in 66 appearances

Betances did not make his season's debut in 2019 until September 15th, when he struck out both batters he faced against the Toronto Blue Jays. He was sidelined with a right shoulder impingement during spring training and suffered several setbacks during his rehabilitation. His abbreviated season did not last very long, as before he could make another appearance, on September 17th, he was placed on the injured list for the remainder of the season with a partially torn Achilles tendon, the result of landing awkwardly on the mound during his first outing. At season's end, he became a free agent. On December 24th, he signed a one-year deal with the New York Mets with an option for one more year.