Note: This page links to 1990s and 2000s All-Star pitcher Kevin Brown. For others with the same name, click here. 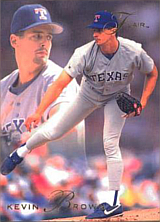 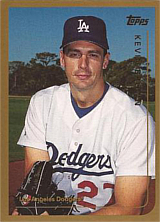 Known for a hot temper, Kevin Brown was a six-time All-Star and two-time National League ERA Champion, pacing the circuit in 1996 with a 1.89 mark as a mener of the Florida Marlins, and again in 2000 with a 2.58 mark with the Los Angeles Dodgers. He won 21 games as a member of the Texas Rangers in 1992 and finished his career with a 211-144, 3.28 record during the height of an era powered by offense.

He had two major weapons on the mound: a heavy sinker and a hard slider. He induced a tremendous number of ground balls with his sinker, accumulating a 1.45 ground out/fly out ratio in his career starting in 1988, the first year those numbers are available (against a league average of 0.79 during that same time frame). He also induced 330 double plays in his career, and did not allow many home runs, with a career ratio of 0.6 HR/9; he twice was as low as 0.3 HR/9, in 1996 and 1998, both league-leading totals those years. His hard slider was a strikeout pitch, and he struck out 200 or more hitters four times. He also had better-than-average control, walking 2.5 batters per nine innings over the course of his career with a low of 1.3 BB/9 in 1996 (the league average that year was 3.3 BB/9). A workhorse, he pitched more than 250 innings three times, leading the American League with 265 2/3 innings pitched in 1992, the first year he made the All-Star team.

While in high school, Brown played baseball, football and tennis. He majored in chemical engineering at Georgia Tech and was named a first team All-American there. He is the winningest major league pitcher among the 17 major league pitchers to come out of the school. Brown pitched for Team USA in the 1985 Intercontinental Cup; despite the presence of Brown, Jack McDowell and Erik Hanson on the mound and hitters like Jeff King, Matt Williams and Joe Girardi, the USA only finished 2-5. He was signed by the Texas Rangers and scout Andy Hancock as the fourth pick overall of the 1986 amateur draft and in 1992, became the second member of the Rangers to win 20 games in a season, after Ferguson Jenkins, who did it in 1974.

Brown was the first player in baseball history to sign a deal worth a cumulative $100 million. In December 1998, he signed a seven-year, $105 million deal with the Los Angeles Dodgers. In his first start in Qualcomm Stadium after signing with the Dodgers, the Padres' public address person played monetary-themed music throughout the game as a dig at Brown. In the two seasons prior to signing the deal, he had built a reputation as one of baseball's premier clutch pitchers, successively leading the Florida Marlins and the San Diego Padres to unexpected World Series appearances in 1997 and 1998 respectively. He went 17-11 for the Marlins in 1996, then followed with a 16-8 season in 1997, when the Fish defeated the Cleveland Indians in October. He won two games in the 1997 NLCS, but lost both of his World Series starts. The Marlins quickly dismantled the outstanding team they assembled to win that title, and Brown found himself with the Padres. He went 18-7, 2.38 during the 1998 season, then won a couple of postseason games as the Padres unexpectedly reached the Series. He ran into the New York Yankees juggernaut in the Fall Classic, going 0-1 in two starts as the Padres were swept.

He is thought of as a bust after signing his huge deal with the Dodgers, but that is only because expectations for him were sky high. In fact, he had some excellent seasons in Los Angeles, including going 18-9 in 1999, 13-6 with a 2.58 ERA in 2000, and 14-9, 2.39 in 2003. This is even more impressive as it came at the height of a hitter's era in baseball. As a team, the Dodgers did not perform well, failing to reach the postseason during that period. A number of large contracts - not just Brown's - created a financial burden, and after the 2003 season they decided to get some financial relief by getting rid of a player who still had some market value in spite of his large salary. He ended up with the New York Yankees, probably the only other team that could afford him, but he was getting on in years by then. He was only 10-6 with an ERA over 4.00 in 2004, his season being shortened when he broke his glove hand late in the year punching a wall. It was rumored that the Yanks were very upset and looking for ways they could void his contract following the season. In the famous 2004 ALCS against the Boston Red Sox, he was rocked in both of his starts, including the decisive Game 7 in which he was the loser, giving up 5 runs in an inning and a third. He pitched one more season, in 2005, but had nothing left in the tank: he was 4-7, 6.50 in 13 starts and called it quits.

Brown became the fifth player to represent four different teams in the All-Star Game (Texas in 1992, Florida in 1996 and 1997, San Diego in 1998, Los Angeles in 2000 and 2003). He was a controversial figure because of his perceived lack of loyalty and his moving from team to team while at his peak, but it was as much a function of the times he pitched in as a matter of personal preference. He went 211-144 over 19 seasons and routinely put up ERAs well below the league average, even if his career ERA of 3.28 looks unimpressive; his career ERA+ of 127 tells a more eloquent story.

Brown was mentioned in the Mitchell Report in 2007, having allegedly been introduced to Kirk Radomski by All-Star catcher Paul Lo Duca. Radomski claimed to have sold him human growth hormone and Deca-Durabolin beginning in 2000 or 2001.