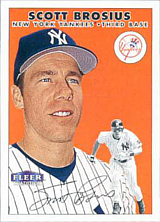 Scott Brosius was a solid third baseman in eleven big league seasons whose star shone brightest under the postseason spotlight. He was the World Series MVP in 1998 with the New York Yankees, batting .471 with 2 home runs and 6 RBI in a four game sweep of the San Diego Padres. In 2001, he hit a game-tying home run against Byung-Hyun Kim and the Arizona Diamondbacks in Game 5 of the 2001 World Series. With two outs in the bottom of the ninth, he connected to send the game to extra innings, a game the Yankees would win. The Diamondbacks ultimately triumphed in 7 games and Brosius retired after the season.

After his playing career, Brosius returned to Linfield College as an assistant coach from 2003-2007, then became head coach in 2008, taking the school to the 2008, 2010, 2013 and 2014 Division III College World Series, winning it all in 2013. He was named NWC coach of the year five times and was 270-96 through 2015, when he stepped down to look for other coaching roles. In 2016, he was hired by the Seattle Mariners to be the hitting coach with the AAA Tacoma Rainiers. In 2017, he joined the parent Mariners as the assistant hitting coach. In 2018, he was moved to third base coach, replacing Manny Acta, who was moved to bench coach.

Scott managed the United States national baseball team at the 2019 WSBC Premier12, a late substitute for Joe Girardi. He skippered the team to a 4th place finish, short of qualifying for the 2020 Olympics.