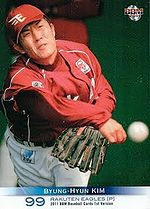 Byung-Hyun Kim had something of a star-crossed career. He began with great promise with the Arizona Diamondbacks and anchored their bullpen on their drive to the 2001 World Series title. But during the series Kim gave up crushing home runs in Games 4 and 5 in New York.

As a teenager, Kim pitched for the South Korean national team in the 1998 Baseball World Cup. He took 3 of South Korea's 4 losses, going 0-3 with a save and a 5.64 ERA. He walked 11 and allowed 22 hits in 22 1/3 IP, but also struck out 28. He tied Jose Contreras for second in the tourney in strikeouts behind Koji Uehara. He lost the finale to Contreras, allowing 4 runs in 5 innings. He won Gold in the 1998 Asian Games.

A favorite of sabermetricians, Kim was acquired by the Boston Red Sox for Shea Hillenbrand in 2003. Kim had some success as a Red Sox, but after struggling near the end of the 2003 season, Kim flipped off a booing crowd during pre-game introductions for one of the Red Sox playoff series. He did not pitch again that postseason.

Kim struggled in August of 2003 with a 5.74 ERA. Some fans believed he didn't have the right "makeup" to be a closer: too small, too quiet, not intimidating, can't beat the Yankees. But Kim seemed to regain his form down the stretch. In September his ERA was 0.00. He went 13 consecutive appearances without allowing an earned run to end the season. His opponents' batting average for that stretch was .136 with one walk allowed in September. But his critics pointed to his lack of control and to a tendency to hit batters or throw wild pitches and said he was a "heart attack closer". So, as the postseason began, Kim was under attack. He was a 24-year-old closer who already had 86 career saves and had already pitched in the World Series. His opponents batting average against him for his career was around .200 and he averaged nearly 11 strikeouts per 9 IP. Yet the fans booed him and the manager benched him.

In Game 7 of the 2003 ALCS against the New York Yankees, Grady Little allowed Pedro Martinez to pitch into the late innings despite many fans pleading for the use of the bullpen. But by that time Kim had already been shut down for the year. It may be that Little would have left Pedro in under any circumstances but it may also have been related to having a bullpen he did not trust.

Suffering from a lack of velocity, Kim was traded to the Colorado Rockies prior to the 2005 season.

On May 28, 2006, Kim gave up Barry Bonds's 715th home run of his career, that allowed Bonds to pass Babe Ruth and move into second place in the all-time home run list.

Kim signed with the Pittsburgh Pirates for 2008 but allowed 5 home runs in 5 innings; his 14.40 ERA led the team in spring training. He was let go before the season started.

He is known for his run-ins with the press in his home country, South Korea, for his extensive napping, and for being one of the hardest throwing submarine pitchers ever.

Kim was on the provisional roster for South Korea for the 2009 World Baseball Classic but lost his passport and was unable to acquire a new one before the final rosters were due, forcing him to miss the cut for the tournament. Kim signed with the Rakuten Golden Eagles in Japan for 2011 but did not make it out of the minors. In 2012, he came back to South Korea, and signed with the Nexen Heroes. As of January 2019, he was still active, pitching for the Melbourne Aces of the Australian Baseball League.