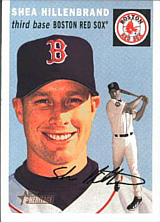 Shea Hillenbrand spent five years in the minors before getting his shot at the majors. In 1998, in Single A ball with the Michigan Battle Cats in the Midwest League, he was an All-Star catcher with a batting average 70 points higher than anyone else on the team. One of his teammates was future All-Star pitcher Justin Duchscherer.

Hillenbrand started his major league career by hitting .343 in April 2001, including getting a hit in his first 9 games, as well as 18 of his first 19. This garnered him the playful nickname of "Everyday Shea" from the Boston Red Sox fans. He hit his first career home run on April 7th, thus making the first month of his career all the better. He was a regular third baseman with the Red Sox in 2001 and 2002, getting 43 doubles in 2002 while playing in Fenway Park.

Hillenbrand was traded to the Arizona Diamondbacks in mid-season of 2003 and he also spent 2004 in the desert as a first baseman, hitting .310 with 36 doubles. In 2005 he was with the Toronto Blue Jays, splitting his time between first base, third base, and DH, and again hitting 36 doubles while leading the league in hit-by-pitches. He was named to the All-Star team in 2002 and 2005. While he was a popular player because of his high batting average and good doubles totals, he was always handicapped by the small number of walks he drew and his limited home run power for a player with little defensive value.

He was designated for assignment by the Blue Jays in mid-July 2006 while hitting .301, as a result of personality issues with the team, something the Blue Jays called "irreconcilable differences". He had previously said that he expected to be traded. In spite of the unusual circumstances, seven teams immediately expressed interest in picking him up. Much of the conflict involved manager John Gibbons. It didn't take long before the San Francisco Giants acquired him. His production fell off sharply with the Giants, though, with a .248 batting average in 60 games. He then played for both Los Angeles teams in 2007, hitting .254 in 53 games for the Angels and .243 in 20 games for the Dodgers. 2008 found him playing 3B for the York Revolution of the independent Atlantic League and he called it a career after trying once more in the Atlantic, batting .194 for the Bridgeport Bluefish in 2012.

Hillenbrand and his third wife appeared on episodes of House Hunters International in 2017 and 2018.