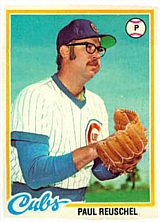 The older brother of Rick Reuschel, pitcher Paul Reuschel played at Western Illinois University and was drafted three times (by the Cincinnati Reds, Washington Senators, and California Angels) before being selected by and signing with the Chicago Cubs in 1968. Initially a starter, he won 11 games for the Quincy Cubs in 1969 and notched 10 victories for the San Antonio Missions. He reached the Triple A level with the Wichita Aeros in 1972 and spent nearly four years with the club, leading the American Association with 15 saves in 1974.

Reuschel reached the majors at a 28-year-old in 1975, joining his younger brother on the Cubs staff. On August 21st, Paul relieved Rick in the 7th inning of a game against the Los Angeles Dodgers at Wrigley Field, and the two combined to throw a shutout, becoming the first pair of brothers to accomplish the feat in MLB history.

After parts of four years with Chicago, Reuschel was traded to the Cleveland Indians for Dennis DeBarr during the 1978 season. He remained with the Tribe through the 1979 season, after which he hung up his cleats.