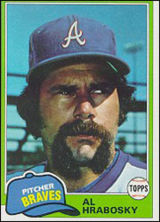 Hrabosky with Fox Sports in 2013

"When I'm on the road, my greatest ambition is to get a standing boo." - Al Hrabosky

Known for his Fu Manchu mustache during his playing days, Al Hrabosky has been a broadcaster for the St. Louis Cardinals since 1985. Nicknamed "The Mad Hungarian" for the way he "psyched himself up" before each batter, turning his back to the plate, pounding the ball into his glove and working up visible anger, Hrabosky was actually a likable character. He was one of the first relievers to build up such a distinctive character, and it made him popular across baseball.

Besides the Cardinals, Al also pitched for the Kansas City Royals and Atlanta Braves before retiring in 1982. He logged 97 saves before "save inflation" took over and was considered one of the best firemen of his day, tying with Rawly Eastwick for the National League lead in saves in 1975.

Hrabosky also played for the West Palm Beach Tropics of the Senior Professional Baseball Association in 1989. He went 1-2 with 5 saves for the club.

Hrabosky played himself in the 1985 movie The Slugger's Wife.