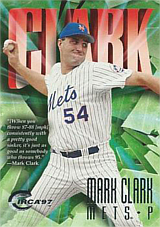 “Can you believe that? Elvis [Presley] meant absolutely nothing to Mark? ...He didn’t cry for Elvis, but he cried for Bake [McBride]." - Marjorie Clark, Mark's mother, to the St. Louis Post-Dispatch, on Mark's devastated reaction to Bake McBride's trade to the Philadelphia Phillies in 1977

Big right-hander Mark Clark eventually recovered from the devastating loss of Bake McBride from his beloved St. Louis Cardinals, joining the club in 1991 after being a 9th round draft pick in the 1988 amateur draft. The Cards would eventually deal Mark to the Cleveland Indians for Mark Whiten, but he would truly blossom with the New York Mets, winning 14 games and tossing 212 1/3 innings in 1996. Mark enjoyed another 14-win season in 1997, split between the Mets and Chicago Cubs, making his lone postseason start with the Wrigley bunch in 1998. He retired after faltering in the Texas Rangers bullpen in 2000, finishing with a 74-71 record and 4.61 ERA in parts of 10 seasons.

He is a member of the Baseball List of Rhyming Names, along with such notables as Don Hahn, Larry Sherry, Paul Schaal, Still Bill Hill, Lu Blue, and Greg Legg.