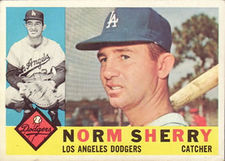 Norm Sherry, brother and sometimes battery mate of pitcher Larry Sherry, was a catcher in the major leagues from 1959 to 1963, and managed the California Angels for two years in the 1970s. He also was a coach for the Angels for three years. Another brother, George Sherry, was a pitcher in the Pittsburgh Pirates chain in 1951.

Sherry was signed in 1950 and spent some of 1951 and 1954-1955 with the Fort Worth Cats. He missed the 1952 and 1953 seasons due to military service. From 1965 through 1976, when he wasn't at the major league level as a manager or coach, he was doing the same at the minor league level for the California Angels or Los Angeles Dodgers. After that, he was a coach with the Montreal Expos, and Gary Carter's biography at the Hall of Fame website gives Sherry credit for helping Carter become a good defensive catcher. Sherry was also a New York Yankees scout in 1968.

Sherry is often given credit for suggesting to Sandy Koufax that he throw a little less speedily in order to maximize his control, something that may have led to Koufax's tremendous success from 1962 to 1966.

With his brother Larry, he was half of a brother battery, although Norm was never the Dodgers' primary catcher. Major League baseball has featured several such fraternal pitcher-catcher tandems over the decades, the most famous of which are probably Wes Ferrell and Rick Ferrell, and Mort Cooper and Walker Cooper.