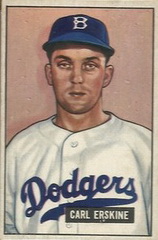 Carl Erskine was a starting pitcher on the great Brooklyn Dodgers teams of the 1950s, playing alongside Hall of Famers Jackie Robinson, Roy Campanella, Duke Snider, Pee Wee Reese, and a young Sandy Koufax. He went 15-2 over the last three months of the 1953 season, won 20 games that year and was an All-Star in 1954. Erskine also pitched two no-hitters, one on June 19, 1952 against the Chicago Cubs and the other versus the New York Giants on May 12, 1956. He played on five Dodgers teams that went on to face the New York Yankees in a crosstown World Series. His best weapon on the mound was an outstanding overhand curve ball. After his career ended, he returned to his hometown of Anderson, IN, was baseball coach at Anderson College for 12 years (1961-1971 and 1973), and wrote two books of anecdotes from his playing career. He was inducted into the Indiana Baseball Hall of Fame in 1979.

Erskine's career winning percentage is a lofty .610, which puts him at # 89 on the all time list.

He served at the U.S. Naval Training Station in Sampson Air Force Base, NY during World War II. "After high school graduation in 1945," Erskine wrote in his autobiography Tales from the Dodger Dugout, "I was drafted into the US Navy. World War II was in full swing. When boot camp was over, I was stationed at Boston Navy Yard. The 1946 baseball season had started, so I went to the recreation officer, introduced myself and asked if I could get on the baseball team. The officer seemed a little indifferent, then asked me my name and where I had ever played. I told him I had pitched in high school and semipro in Indiana. He looked me over, asked me what I weighed (165) and then said he had enough pitchers. I went away disappointed and found a local semipro team to pitch for on Sundays." Lack of interest from the Navy did not stop his playing career however, as the Brooklyn Dodgers and Boston Braves were quickly engaged in a bidding war for his services. Branch Rickey won the contest for the Dodgers, but after Erskine had pitched nine games for Danville in the Three-I League, Commissioner Happy Chandler voided his contract, as he had been signed as an active serviceman. He signed another contract, and received another signing bonus from the Dodgers shortly after his discharge.

His greatest performance came in Game 3 of the 1953 World Series on October 2nd. With the Dodgers down two games to none, he pitched a complete game 3-2 victory while striking out a World Series record 14 Yankee hitters, including Hall of Famer Johnny Mize in the 9th inning to clinch the record which would stand until Sandy Koufax struck out 15 batters in Game 1 of the 1963 World Series. Another highlight came in Game 5 of the 1952 World Series on October 5th. After having lost Game 2, he was roughed up early in this next start, and he had already given up 5 Yankee runs when manager Charlie Dressen came to visit him on the mound in the 5th inning. Just as he was about to yank Erskine from the game, Dressen changed his mind, and Erskine settled down to retire 19 consecutive hitters, eventually winning the game, 6-5, in 11 innings.

Erskine's son, Gary, was drafted by the Dodgers in 1969 but never signed with the club. His youngest son, Jimmy, was born with Down syndrome, and Erskine spent much of his retirement years caring for him and working on behalf of other similarly-affected children. On May 20, 2012, an 85-year-old Erskine was asked to perform the National Anthem on his harmonica prior to an NBA playoff game between the Indiana Pacers and the Miami Heat in Indianapolis, IN.