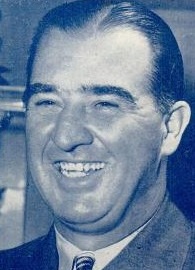 Inducted into Hall of Fame in 1982

Poster for a Chandler lecture in 1950

Nicknamed because of his jovial nature, Albert "Happy" Chandler was elected Commissioner of Baseball in 1945. His personality was very different from the austere judge Kenesaw Mountain Landis, whom he succeeded, but in spite of a brief tenure, he was a significant figure in baseball's history. During his tenure, he gave his blessing to the Brooklyn Dodgers to break the color barrier in 1947 when Jackie Robinson made his debut, despite the misgivings of many owners. This makes him a key, albeit underrated, figure in the integration of Major League Baseball. One of his more controversial moments came that same year, when he suspended Dodgers manager Leo Durocher for the season for his association with known gamblers. Facing insufficient owner support for re-election, he resigned in 1951.

Prior to his time as Commissioner, Chandler was Governor of Kentucky from 1935 to 1939 and a Senator from 1939 to 1945 (during which time he was a proponent of Major League Baseball continuing during World War II). He later went on to become Governor of Kentucky again from 1955 to 1959.

Chandler was elected to the Hall of Fame in 1982 and died of a heart attack in 1991, at age 92. He is one of three Hall of Famers to have served in Congress (Jim Bunning and Morgan Bulkeley are the others).

In 2004, Chandler's grandson, A.B. Chandler, was elected to Congress from Kentucky.