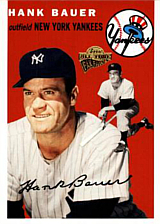 "He was a players' manager. He didn't overcomplicate things.": - Jim Palmer, about Bauer as a manager in Baltimore

Outfielder Hank Bauer was a regular for the New York Yankees for over a decade, playing in the World Series in nine seasons and winning seven times. A solid hitter who also possessed power, Bauer was considered to have one of the strongest and best outfield arms in baseball. After the 1959 season, he was traded along with Don Larsen to the Kansas City Athletics in a seven-player deal that brought Roger Maris to New York.

Bauer became manager of the Athletics during the 1961 season, his final year as a player. He remained the club's skipper through the 1962 season before joining the Baltimore Orioles as a coach in 1963. He took over as the O's manager in 1964 and led the team to a World Series victory in 1966. He remained with the club until 1968, when he was replaced by Earl Weaver. He returned to the Athletics, now located in Oakland, for one last season as manager in 1969.

Prior to his big league career, Bauer served in the Marines during World War II, missing the 1942-1945 seasons. He was wounded during the fighting on Okinawa and earned two Bronze Stars and a pair of Purple Hearts. He died of cancer in 2007 at age 84.