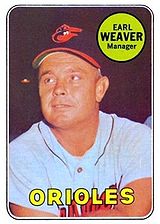 Inducted into Hall of Fame in 1996 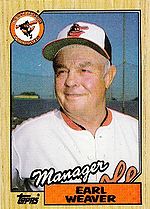 "It's what you learn after you know it all that counts." - Earl Weaver

Earl Weaver served an exceptionally long apprenticeship in the Baltimore Orioles organization. A minor league second baseman, he began his managerial career in 1956. He was a player-manager for five seasons in the minors, then began his ascent through the Orioles minor league system. During this time he had an 841-697 record and he won three pennants in the minors.

Weaver joined the Orioles' major league coaching staff as first base coach in 1968 and on July 10 he replaced Hank Bauer as manager, a job he held until 1982 and again in 1985 and 1986. He was ejected from 98 games in his managerial career (other sources say 94) and was once ejected in both halves of a doubleheader. He was known for his long-running feuds with certain umpires, most notably Ron Luciano. He once stated over the public address system, after being ejected from a game by Luciano one more time, that he was "protesting the game because of the umpire's integrity"; that stunt earned him a fine from the American League. He was the first manager tossed from a World Series game in 60 years when he was thrown out by Shag Crawford for arguing balls and strikes in the 1969 World Series; he was also suspended for one week for striking umpire Terry Cooney in the face in 1982. He was 1480-1060 (.583) as a major league manager.

Earl Weaver believed that good pitching, fundamentals, and three-run homers were the key to winning baseball games. Weaver and Hall of Fame pitcher Jim Palmer were known for having their differences over the years, as Weaver put it by saying: "Jim won 20 percent of my games. I sent him out there 300 times and he'll tell you he'd won them all if I did my job right." He was also famous for getting the most out of marginal ballplayers; his approach was simple: focus on what a player can do, not what he cannot do. So where most managers saw Terry Crowley, for example, as a hitter with no defensive position, no speed, useless against left-handed pitchers and with not enough power to justify the defensive cost, Weaver saw him as a great pinch-hitter who had an excellent on-base percentage against righties. By using him in the right situations, he made him a solid contributor to winning teams. He was fond of platooning (his platoon of left-fielders Gary Roenicke and John Lowenstein was one of the most productive in history), and of pinch-hitting for weak hitters who were good on defense. In a typical arrangement, he had fielding wizard but weak-hitting Mark Belanger as his starting shortstop, with the better-hitting Kiko Garcia able to step in if he needed more offense. Although adverse to one-run strategies such as the sacrifice bunt and the stolen base, he always kept some speedy players around, such as Al Bumbry, Larry Harlow or Tom Shopay, to use as pinch-runners and compensate for defensively-challenged outfielders. He used his roster to the maximum, having a role for every player on his bench. For all his love of role players, though, he recognized a great player when he had one: Frank Robinson, Brooks Robinson, Boog Powell, Lee May, Eddie Murray or Ken Singleton never had to worry about losing their everyday spot to anyone else; they had some of their best seasons playing for Weaver.

His handling of pitchers was also a point that made him famous. He was an advocate of the four-man starting rotation even after it had largely been displaced by the five-man one, and as a result managed a huge number of 20-game winners - 22 during his tenure. Palmer was of course the star, but Mike Cuellar, Dave McNally, Pat Dobson, Mike Flanagan and Steve Stone also gave him big years on the mound. He expected his starting pitchers to go deep into games and kept a small bullpen with a mix of righties and lefties to use for situational match-ups. He made excellent use of lefthanders such as Marcelino Lopez and Tippy Martinez who had very good seasons for him in support of his closers Pete Richert, Don Stanhouse or Tim Stoddard. He also always kept one or two young starters in a swingman role, using them in long relief and for the occasional start. Doyle Alexander, Jesse Jefferson, Roric Harrison, Paul Mitchell, Wayne Garland and Don Hood all had success in that role, while Scott McGregor and Dennis Martinez started thus before becoming front-line starters.

Weaver also liked unusual strategies. Not only would he juggle his batting order constantly to take advantage of certain hitters having success against a certain starter, but he liked not to set it in stone when the game began. On some occasions he had OF Royle Stillman listed as his lead-off hitter and starting shortstop in road games in 1975; after Stillman took one at-bat to lead off the game, Belanger would take over on defense at shortstop in the bottom of the inning. After the 1980 season, Major League Baseball had to change the designated hitter rule to counter one of his tactics: he would list one of his inactive starting pitchers as the DH in the batting order, then when the spot first came up during the game, substitute one of his various hitters depending on the situation. The rule was changed to force the starting DH to make at least one plate appearance in the game. Another tactic he liked to use occasionally was, with runners on first and third and less than two outs, to have the runner on first be caught in a rundown on purpose, thereby allowing the runner on third to score; he won an extra-inning game against Oakland in 1979 when Eddie Murray stole home on this play. He would also try to stretch his players defensively to obtain an advantage: he tried to use Murray as a third baseman early in the 1978 season in order to get an extra hitter in the line-up, and liked marginal players such as Chico Salmon, Lenn Sakata and Floyd Rayford because they could play all sorts of positions in a pinch, something that came in handy with all the late-game pinch-hitting he liked to use.

Weaver is also famous for saying "Bad ballplayers make good managers, not the other way around. All I can do is help them be as good as they are."

In 1989, Weaver became manager of the Gold Coast Suns of the Senior Professional Baseball Association.

In 2012, the Orioles honored Weaver by erecting a 7-foot statue of the diminutive manager in the picnic area behind the centerfield fence at Camden Yards. Weaver was present for the unveiling on June 30th; he is depicted with both hands in his back pockets. A few months later, he was participating in a Caribbean cruise sponsored by the Orioles when he collapsed in the morning of January 19, 2013 and died shortly thereafter. That same day, another all-time great, Stan Musial, also passed away. The Orioles paid him tribute during the 2013 season by wearing a circular orange patch on the right shoulder of their uniform, with Weaver's number 4 written in black.