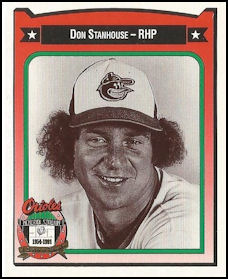 Earl Weaver's nickname for Don Stanhouse was Full Pack. Weaver, who was Stanhouse's manager with the Baltimore Orioles, claimed he went through a full pack of cigarettes while the reliever pitched. Another memorable quote of Weaver's was, "He doesn't suffer from stress. He's a carrier." Stanhouse got hitters out, but was notorious for throwing a lot of pitches to each batter and putting a lot of men on base. Even in his best seasons, 1978 and 1979, he walked 6.3 batters per 9 innings pitched.

His other nickname is probably better remembered. A play upon Stan "the Man" Musial, Stanhouse was Stan "the Man Unusual". With the Baltimore Orioles, he had the knack for pitching in and out of trouble, and was known as a free spirit and an aficionado of practical jokes off the field. He was converted to closer by manager Dick Williams in the second half of the 1977 season with the Montreal Expos, after a good year as a starter for the Expos in their horrendous 1976 season and being the team's number 2 starter behind Steve Rogers at the start of 1977. In that capacity, he had the honor of starting the first game ever played at Stade Olympique, on April 15th against the Philadelphia Phillies. He did quite well as a reliever, saving 10 games, and was a key player in a multi-player trade with the Orioles after the season. Rudy May, Bryn Smith, Gary Roenicke and Joe Kerrigan were among the other players involved in thatd eal.

He saved 24 games for the Orioles in 1978 and 21 in 1979 when the Birds reached the World Series. Both totals were good for third in the American League. He was roughed up by the Pittsburgh Pirates in the Series, however, giving up 6 hits and 3 walks in only 2 innings of work, and being charged with the loss in Game 2.

In his brief tenure with the Los Angeles Dodgers, which he joined after signing a big free agent contract in 1980, he simply had the knack for pitching into trouble. His line with the Dodgers was 2-2 with 7 saves in 21 games, pitching 25 innings with a 5.04 ERA. He came back to the Orioles for one more season in 1982, playing alongside another former Oriole whose pitching skills had apparently vanished, Ross Grimsley. The two friends were used in mop-up relief that year, with Stanhouse going 0-1, 5.40, in 17 games.

Stanhouse pitched in 12 games his first pro year, but also was an infielder for the Tri-City A's in 1969. From his days as an infielder, he retained some hitting ability. In three seasons with the Expos, he went 21 for 102, for a respectable .206 average; he is one of only two pitchers in team history - the other is Scott Sanderson - to hit a grand slam, achieving the feat on July 6, 1977 against the Chicago Cubs' Bill Bonham. However, there was little use for his batting skills after he became a closer and was traded to an American League club.