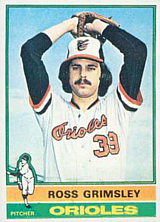 Ross Grimsley is the son of Ross Grimsley Sr.. He won two games in the 1972 World Series for the Cincinnati Reds.

Ross had a less than stellar debut in the major leagues. Starting for the Reds against the Montréal Expos on May 16, 1971, he gave up 4 runs on 5 hits and a walk in 1 2/3 innings, and was charged with a 9-3 loss. He went on to have a very solid rookie season, however, going 10-7, 3.57 in 26 starts for the Reds, including three shutouts. He made the 1971 Topps All-Star Rookie Team as the left-handed pitcher. In 1972, he was 14-8, 3.05 as one of the starters for the National League champions. He threw a complete game two-hitter to defeat the Pittsburgh Pirates, 7-1, in Game 4 of the 1972 NLCS, but was charged with the loss in Game 2 of the World Series against the Oakland A's. He gave up 2 runs in 5 innings that day, then made relief appearances in Games 5 and 6, picking up the win each time as the Reds extended the Series to seven games. He was called on again with the Reds trailing 3-2 in the 7th inning of the deciding game. With two outs and Catfish Hunter on second base, he came in to issue an intentional walk to Joe Rudi, then struck out Mike Hegan to end the inning and keep the Reds' chances alive, but neither team would score again.

Grimsley became a free agent after the 1977 season and signed with the Montreal Expos. He had his best season in the bigs for them in 1978, becoming the only pitcher in Expo history to win 20 games in a season. He started both halves of the season by throwing complete game shutouts and made the All-Star team alongside rotation mate Steve Rogers, the first time the Expos had more than one player represent them at the mid-summer classic. On October 1st, he won his 20th game when manager Dick Williams chose to let him bat in a key situation in the 9th inning of a 1-1 tie with the St. Louis Cardinals; Grimsley responded with a single that loaded the bases, the Expos went on to score three runs, and he finished the game to earn the win in his 19th complete game of the year. He finished the season 20-11, 3.05, having pitched 263 innings. His franchise record of 20 Ws was only matched in 2012, when Gio Gonzalez became a 20-game winner for the Washington Nationals. The number of innings and complete games he pitched in his great season may have been a bit too much, as he struggled badly in 1979, while the Expos had the first winning season in franchise history. He lost his spot in the rotation after a dreadful outing against the New York Mets on August 10th, when he allowed all seven batters he faced to reach base before leaving the game and being charged with a 7-1 loss. He was confined to the deepest reaches of the bullpen after that, although a string of doubleheaders forced Williams to give him the ball a few times in the heat of the pennant race in September, with mixed results. He ended the year at 10-9, 5.35, by far the worst ERA on the staff, and many fans blamed him for keeping the Expos from winning the division title. He was back with the team at the start of the 1980 season, but when he showed that his struggles the previous year were no fluke, he was banished to the cellar-dwelling Cleveland Indians in a trade in mid-July. He was a combined 6-9, 6.59 for the two teams.

After spending all of 1981 away from the majors, Grimsley made the Orioles' staff as a long reliever in 1982, sharing time in mop-up relief with another reclamation project, Don Stanhouse, who was also trying to prove he had some gas left in the tank. He did have one more great outing left in his arm. On May 6th, he replaced Jim Palmer after only three batters against the California Angels, and did not allow a run while pitching into the 7th inning. He earned his final major league win that day, 9-2, but would only pitch 21 times, with a record of 1-2, 5.25. His appearances became increasingly less frequent as the O's became involved in a tightly-fought pennant race with the Milwaukee Brewers. His last major league appearance came against the Brewers on September 24th, a game in which Baltimore was already trailing 15-6 after 6 innings.

Grimsley was once described as throwing with three speeds: slow, slower and slowest. He threw mainly breaking pitches and was a nibbler, working the edges of the strike zone while striking out few batters, and walking a few less. He had long curly hair, and was often suspected of using some sort of gel or vaseline in his coif that he could somehow smear the ball with to give his breaking pitches more bite. While there was a lot of talk about pitchers doctoring the baseball at the time, Grimsley was never caught doing anything illegal. In 11 major league seasons, he finished with a creditable record of 124-99, with a 3.81 ERA in 2,039 innings on the mound.

Grimsley was a pitching coach in the San Francisco Giants chain from 1999 to 2014, last working with the young arms of the Richmond Flying Squirrels.