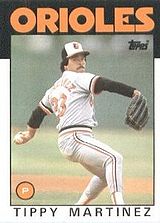 Pitcher Tippy Martinez played fourteen seasons in the majors and was a mainstay in the Baltimore Orioles bullpen for more than a decade.

Martinez was selected by the Washington Senators in the 35th round of the 1969 amateur draft but did not sign, opting to attend Colorado State University instead. He later would become the first big leaguer to come out of the school. He went on to sign with the New York Yankees in 1972, and while playing for the Kinston Eagles the following year, he led the Carolina League with 15 saves. He reached the majors with the Yankees in 1974, and two years later, he was dealt to Baltimore as part of a ten-player deal that also sent Scott McGregor and Rick Dempsey to the O's.

On August 24, 1983, Martinez entered a game against the Toronto Blue Jays with a runner on first and the Orioles trailing 4-3 in the top of the 10th. Baltimore had used a series of pinch hitters to tie the game in the bottom of the 9th and were stuck with outfielders John Lowenstein and Gary Roenicke playing second and third base respectively and with infielder Lenn Sakata behind the plate. Upon entering the game, Martinez immediately picked off Barry Bonnell, then walked Dave Collins, picked him off first, gave up a single to Willie Upshaw, and picked him off as well. The Orioles went on to win the game, 7-4, in the bottom of the 10th on Sakata's home run. Sakata later joked that he had to end the game, because there was no way he was willing to go back and catch for another inning.

Martinez recorded a career-high 21 saves in 1983, and Baltimore won the AL East title that year. He notched the win in the decisive Game 4 of the ALCS against the Chicago White Sox and recorded 2 saves in the World Series as his club defeated the Philadelphia Phillies.

In 1989, Martinez played for the Bradenton Explorers of the Senior Professional Baseball Association and went 2-3 with a 4.30 ERA for the club. In 1990, he played for the Daytona Beach Explorers, also of the SPBA. He was 0-1 with a 4.15 ERA when the league folded.