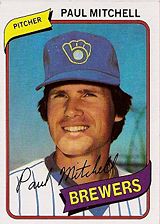 Mitchell moved a lot during his brief major league career. He made his first major league appearance for the Orioles in 1975, was sent to the Oakland Athletics in the trade which brought future Hall of Famer Reggie Jackson to Baltimore before the 1976 season, then was sold to the expansion Seattle Mariners partway through the 1977 season. He finished his career with the Milwaukee Brewers in 1980 after being traded for Randy Stein in mid-1979.

He had won Silver with Team USA in the 1970 Amateur World Series.