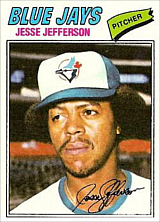 Jesse Jefferson had one career save. It came September 2, 1979 as a member of the Toronto Blue Jays against the Seattle Mariners. He pitched the last one and two-thirds innings, giving up 2 hits, and one earned run, with no walks or strikeouts. Dave Stieb was the winning pitcher. The Blue Jays were a miserable 45 games out of first place on that day.

He was a workhorse starter for the Blue Jays in 1977 and 1978 after being picked from the Chicago White Sox in the 1977 expansion draft. He pitched over 200 innings both seasons, but given he was pitching for some pretty awful teams, he went 9-17 and 7-16 those two years. He lost in double figures all four years he pitched for the Jays, as he followed his two seasons as a full-time starter with records of 2-10 in 1979 and 4-13 in 1980 while being used as a swingman both years. He was never much of a strikeout pitcher, only topping 100 once, in 1977.

He pitched all of his career in the American League - except for one game for the Pittsburgh Pirates at the tail end of the 1980 season. Strangely, his best season was his last one, when he put up an ERA of 3.62 as a long reliever with the California Angels in 1981 (it was his only season with an ERA below 4.00). He re-joined the Baltimore Orioles, his original team, as a free agent after the season, but never pitched in the majors again after being released at the end of spring training in 1982.