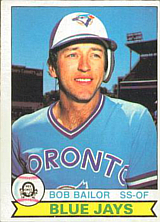 “I had to work to be average... I don’t think I was overly talented. I worked hard, and it’s probably why I hung on as long as I did. The ability to play all those positions helped too.” - Bob Bailor, to the Syracuse Post-Standard, February 5, 1988

Known for his speed and being difficult to strike out, Bob Bailor played more than a decade in the majors.

Originally an infielder, Bailor was signed by the Baltimore Orioles in 1969 but struggled to break into a big league lineup that included Brooks Robinson, Bobby Grich, and Mark Belanger. He was the very first pick of the Toronto Blue Jays in the 1976 expansion draft and, after being moved to the outfield, hit .310 for the club in 1977. After being named the Jays Player of the Year in his first two seasons, he began to struggle at the plate, and by 1980, he was primarily a utility player. He also pitched three times in 1980, but those appearances were all in blow-outs; he did well in his first two appearances, but was hit hard in his finale, which probably ended any thought that he had a future on the mound.

After the 1980 season, Bob was traded to the New York Mets, where he spent three seasons primarily coming off the bench. He was then traded to the Los Angeles Dodgers in the deal that brought Sid Fernandez to Flushing. After seeing limited playing time in two seasons there, he retired. Following his playing days, Bailor managed several seasons in the Blue Jays organization and was the team's first base coach from 1992 to 1995.