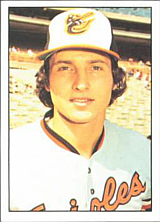 Royle Stillman played parts of two seasons for the Baltimore Orioles before spending the entire 1977 season with the Chicago White Sox. He started 24 games (12 DH 8 LF 4 RF and 1 1B) and was 3 for 20 as a pinch hitter.

Stillman often makes the list of left-handed shortstops, even though he never actually appeared in the field at shortstop. That's because Earl Weaver sometimes batted him first in the lineup and listed him as a shortstop, but then took him out after his batting appearance and put the real shortstop - usually the light-hitting Mark Belanger - into the game. In 1975, Stillman hit .429 in his 14 at-bats while Belanger hit .226 on the year.