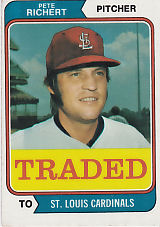 Pete Richert is the only pitcher to strike out four batters in the same inning in his first major league game. In the 3rd inning on April 12, 1962, facing the Cincinnati Reds, Richert struck out Frank Robinson, Gordy Coleman, Wally Post, and Johnny Edwards in order. Coleman reached on a dropped third strike by catcher Johnny Roseboro.

Richert pitched 13 years in the major leagues. Early on, he struggled to find a spot in the Los Angeles Dodgers' starting rotation, then became a successful starter on a losing Washington Senators team, and finally found a role as a reliever in the last seven years of his career.

Signed by the Dodgers in 1958, he had the misfortune to come up in 1962 when the Dodgers were winning 102 games. The Dodgers already had starters such as Sandy Koufax, Don Drysdale, Johnny Podres, and Stan Williams, so Richert and 19-year-old Joe Moeller were reduced to getting such starts as were available.

Moved in the middle of the following season to the Baltimore Orioles, he did a little relieving, and beginning in 1968, became a full-time reliever and never started another game. He saved 12 games in 1969 and 13 in 1970. He appeared in three World Series with the Orioles (1969, 1970 and 1971), but pitched a total of just one inning.

He came back to the Dodgers to work in relief in 1972-1973, and finished out his career with the St. Louis Cardinals and Philadelphia Phillies in 1974.

The most similar player, according to similarity scores, is his contemporary Hank Aguirre, who had slightly fewer wins and saves than Richert.