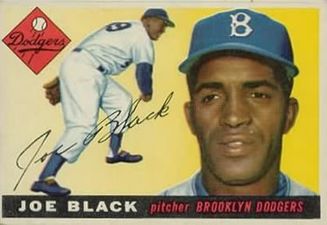 "Irony ringed Joe Black's life in baseball. He appeared without acclaim, determined and fearless, and quickly became the strongest pitcher on the team. Then, with success, came dread. These afternoons as hero might vanish as suddenly as they had come. He had longed to succeed. Now nightmares warned of a sudden end. All of Joe Black's dreams came true, the good ones and the bad. Five years after his brilliant Dodger season, he was dropped by the Washington Senators, a last-place ball club. His baseball skill was spent. At thirty-three, he would have to make a new life and find another dream." - Roger Kahn, The Boys of Summer

Joe Black broke in to the National League with a bang as a 28-year-old rookie for the Brooklyn Dodgers in 1952, winning 15 games while losing only 4. He was already a veteran of many seasons in the Negro Leagues at that point. He grew up "on the wrong side of the tracks", as he told journalist Roger Kahn, in the working-class town of Plainfield, NJ. His family was very poor, but he was a good student and a gifted athlete, which earned him a scholarship to Morgan State University, a black liberal arts college in Baltimore. He obtained his degree, then was drafted into the Army.

Black became a regularly-used pitcher in 1946, posting a 4-8 record. The 23-year-old improved to 9-9 in 1947 and made his first East-West Game, entering as the third pitcher for the East in the second 1947 East-West Game, allowing 5 hits and two runs in three innings; like his predecessors, Rufus Lewis and Luis Tiant Sr., he was hit hard in a 8-2 loss. He did go 1 for 2 at the plate. He became a star the next year, going 10-5 and joining long-time star Bill Byrd at the head of the Baltimore rotation. In the second East-West Game of 1948, he pitched three scoreless innings for the save as the East won, 6-1, behind Max Manning, Dave Barnhill and Black. Joe allowed two hits and no walks. He followed with years of 11-7 and 8-3, drawing the start for the East in the 1950 East-West Game and allowed four hits, a walk and two runs in three innings, striking out none in the 5-3 loss; he avoided taking the defeat. Black later would say "I pitched my greatest games in miserable ball parks, in the colored league, with nobody watching".

Black was already 26 when he was scouted and signed by the Brooklyn Dodgers in late 1950. In 1950-51, he went 5-7 with a 4.22 ERA for Cienfuegos in the Cuban Winter League. He and teammate Jim Gilliam were purchased together by Brooklyn from Baltimore. After a year pitching for the Montreal Royals of the International League (7-9, 3.85) and St. Paul Saints of the American Association (4-3, 2.25) in 1951, he returned to Cuba for the 1951-52 winter, where he had a dominant season. He led the league in winning percentage, wins (15-6), strikeouts (78) and ERA (2.42) in notching a pitching Triple Crown while again toiling for Cienfuegos.

He was an unknown quantity to white baseball in 1952, a big man with an excellent fastball and a sharp small curve (which would probably be called a slider today) who did not fear anyone. He was used out of the bullpen and established himself as one of the Dodgers' best pitchers, going 15-4 with 15 saves and a 2.15 ERA in 56 games. He was only used as a starter twice, in the waning days of the season, winning both times, one of them a complete game. Manager Charlie Dressen decided that he wanted to use his best pitcher for as many innings as possible in the upcoming World Series, following in the footsteps of Phillies manager Eddie Sawyer, who had used his relief ace Jim Konstanty as his Game 1 starter in the 1950 World Series.

Joe started and won Game 1 of the 1952 World Series on October 1st, with a 6-hit complete game facing off against the New York Yankees' Allie Reynolds. He subsequently became the first black pitcher to win a World Series game. He was called upon to start Game 4, three days later, and put up another great performance, giving up a single run in seven innings - a home run to Johnny Mize - but lost the game when Reynolds pitched a shutout for the Yanks. With the Series tied at three, he came back for another start in the deciding Game 7 on October 7th, but was feeling the weight of pitching 16 innings over the previous week after having been used as a reliever all year. He pitched gamely but gave up three runs in 5 1/3 innings, including home runs to Mickey Mantle and Gene Woodling, and left trailing, 3-2. The Dodgers failed to mount a comeback and Black was charged with a second loss, in spite of maintaining a solid 2.53 ERA over 21 1/3 post-season innings. After the season, he was voted the National League's Rookie of the Year.

Things started to go downhill for Black beginning in spring training 1953. Dressen was concerned that he threw only two pitches and felt that if he mastered a change-up, he would be invincible. Black went along with this, but it messed with his mechanics and his mind, and he was no longer as sharp when the season opened. He struggled through a poor year, posting a fat 5.33 ERA in 34 games. He did have a respectable record of 6-3 with 5 saves, but Clem Labine eclipsed him as the Dodgers' go-to late innings guy, and when the team returned to the World Series, Joe was reduced to mop-up duty. He only pitched one inning that postseason, giving up a run in closing an 11-7 loss to the Yankees in Game 5 on October 4th.

He failed to recapture the magic of his rookie season in later years, going back to the minors in 1954, going 12-10 with a 3.60 ERA for Montreal, then bouncing to the Cincinnati Redlegs (being traded for Bob Borkowski and cash) in 1955 and 1956 before closing his career with the Washington Senators in 1957. His best performance was a 5-2 record with a 4.22 ERA in 102 1/3 innings for the 1955 Redlegs; the rest of his stat line is quite wretched. He returned to the minors in 1957, going 1-1 with a 4.94 ERA for the Seattle Rainiers and getting no decisions with the Tulsa Oilers. Black was pitching in pain these later years and later found out he had a stress fracture in the humerus bone of his pitching arm. Overall, Joe crafted a stellar 30-12 record (one of the best winning percentages ever) with 25 saves and a 102 ERA+ in the majors, 24-23 in the minors and 46-36 in the Negro Leagues for a 100-71 record in pro baseball.

Retiring after the 1957 season, Joe went back to college at Seton Hall University and Rutgers University to earn his masters degree, then taught for a few years at his former high school in Plainfield. However, he became discouraged with the poor pay, the difficult working conditions - his neighborhood had become a veritable ghetto by then - and the lack of respect afforded a high school teacher in the inner-city in the early 1960s. Making use of his education, he landed a job with the Greyhound Corporation and moved to Chicago where he became a senior executive with the transportation company while regularly giving lectures to youngsters about the necessity of hard work to move out of poverty.

Joe Black played Negro Leaguer Joe "Payday" Sims in a 1991 episode of The Cosby Show. He died of prostate cancer at 78.