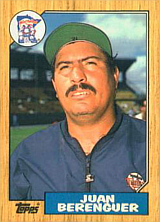 Juan Berenguer played for the Panamanian national team in the 1973 Amateur World Series. He was a part of two World Series winning squads, the 1984 Detroit Tigers and the 1987 Minnesota Twins. He was plagued by control problems much of his early career. Armed with a mid-90s heater, he saw his greatest success upon arrival with those '87 Twins, later becoming the star of his own music video, "The Berenguer Boogie".

After his major league career ended following the 1992 season, Juan starred for the Minneapolis Loons of the independent North Central League and Prairie League. In 1994, he went 3-1 with a 1.48 ERA and 21 saves, and in 1995, he went 2-3 with a 0.82 ERA, 2 walks to 32 K in 33 innings and 9 saves while being named the league's top reliever. The Minneapolis Loons club disbanded after these two seasons.

In addition to being known as "Señor Smoke" and "El Gasolino", teammates often called Juan "Pancho Villa". His brother José Berenguer was a teammate on the Panamanian national team.