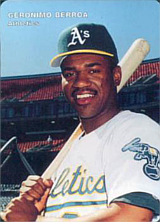 Geronimo Berroa was one of many great journeymen who played what seemed like a lifetime in the minor leagues but also found success playing in The Show.

Berroa played for seven different major league organizations before he hit his third major league home run. He first played in the Toronto Blue Jays farm system after being signed in 1983. He played with Knoxville in the Double A Southern League in 1987, leading the loop in total bases with 297. He made his major league debut nearly seven years after being signed, with the Atlanta Braves in 1989, after they picked him in the 1988 Rule V Draft. After seeing 81 games of action in 1989, Berroa only saw seven more the following season of 1990. He was chosen the Triple A Nashville Sounds' MVP in 1992, posting a .328 batting average, second overall in the American Association. Berroa resurfaced in the majors in 1992 with Nashville's parent club, the Cincinnati Reds, seeing action in 13 games late in the season. Signed as a free agent by the Florida Marlins before their initial season, Berroa played 14 games for them in 1993.

He moved next to the Oakland Athletics, where he saw most of his action as a big leaguer. Gerónimo played full-time with Oakland from 1994 to 1996, primarily working as a designated hitter but also spending time in the outfield. He hit 36 homers and topped both the 100 RBI and 100 runs scored mark in 1996, his finest major league season. Berroa returned to Oakland in 1997 but was traded to the Baltimore Orioles at midseason. Berroa played with the Cleveland Indians and the Detroit Tigers in 1998, before finally playing with the team he first signed with, the Toronto Blue Jays. After playing 22 games with the Jays in 1999, he played 24 games with the Los Angeles Dodgers in 2000 to bring his major league career to an end. He later played in the Korea Baseball Organization.

Berroa was Caribbean Series MVP in 1990 and 1991. He was the second two-time Series MVP, following Mexican legend Héctor Espino. Through 2015, Neifi Pérez is the only other two-time MVP. Berroa had 6 homers, 21 RBI and 17 runs in 28 Caribbean Series games, though he hit a modest .253 with a .444 slugging percentage. He was on four Series winners. In 2016, he was inducted into the Caribbean Baseball Hall of Fame in a class with Luis Polonia, Felipe Alou and Tony Peña.