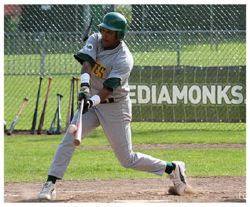 Fausto Álvarez was the long-time right fielder for Santiago de Cuba before retiring, then going to Hoofdklasse for a second career in his late 40s.

Like many retired Cuban stars of the decade, Álvarez was sent overseas by the Cuban government to coach in another country; he apparently had a girlfriend from Holland as well, another factor involved. Fausto went to Holland as a minor league coach in 2005. In 2006, earning a pension from Cuba after his retirement, he became the #5 hitter, 1B/DH and batting coach for the Amsterdam Pirates. The 45-year-old hit .293/.328/.480 with 14 doubles, one behind leader Yuji Nerei.

In 2007, the player-coach did even better. He swatted three home runs on June 23 to tie the Hoofdklasse record, becoming the oldest player to have done so as well. Impressively, the first two homers came off of Rob Cordemans, a 4-time Dutch Pitcher of the Year. Álvarez drove in six that game to help Kenny Berkenbosch to the victory. On July 8, he hit his 9th home run, setting a new Hoofdklasse wood-bat record, breaking the mark held by former major leaguer Ivanon Coffie. Álvarez hit .365/.484/.722 overall with 28 runs, 12 homers, 35 RBI and 29 walks in 38 games. He tied Ryan Murphy for 4th in the league in average, led in slugging (188 points ahead of runner-up Roel Koolen), was third in OBP, led in homers (five ahead of Tjerk Smeets), tied three others for 10th in runs, was third in RBI (behind Smeets and Martijn Meeuwis), led in total bases (91) and was 4th in walks. He won MVP honors that year, the first foreign-born winner in 14 years, beating out Danny Rombley and Meeuwis, the other finalists.

Álvarez went 4 for 4 with a home run on Opening Day, 2008. At 47 years and 5 months old, he also became the oldest player in Hoofdklasse history; Stan Bahnsen had held the record with 47 years, 4 months. In the 2008 Hoofdklasse season, Fausto hit .296/.347/.454 with 5 homers. He finished 10th in slugging, tied Bryan Engelhardt and Eugène Kingsale for third in homers (one behind Jourick Blanco and Sidney de Jong), was 6th in RBI (31) and tied Wesley Connor for 6th in total bases (69). He was 6 for 17 in the playoffs, then 5 for 10 with a homer, 4 runs and 5 RBI in the 2008 Holland Series to give Amsterdam its first title in 21 years. The home run was a 3-run shot off David Bergman that put the Pirates ahead for good in the finale.

In the 2009 European Cup's Nettuno phase, Fausto was 4 for 11 with a double, triple, homer, 4 runs and 8 RBI. He tied David Gauthier for the most runs batted in during the event. He was 2 for 6 in the Cup's Final Four.