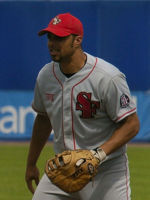 Percy Isenia has been a member of the Dutch national team from 1999 through the present (August 2008) as well as a solid productive in Hoofdklasse.

In 2000, the 23-year-old Neptunus player tied for 4th in Hoofdklasse with 35 runs, tied for 8th with 3 home runs and tied for fifth with 29 RBI. He had as many RBI as long-time Dutch star Marcel Joost and one ahead of two other Dutch legends, Rikkert Faneyte and Dirk van 't Klooster. In the 2000 Haarlem Baseball Week, Isenia was 4 for 15 with a double, two walks, two RBI and a run.

Isenia hit .250/.280/.333 as the Dutch first baseman in the 2000 Olympics in which the Netherlands finished fifth. In 2001, Percy helped the Netherlands win the European Championship, batting fifth and playing first base in the Gold Medal game. His 39 RBI for Neptunus in 2001 were second in Hoofdklasse to Michael Crouwel. He helped Neptunus to the title. In the 2001 World Port Tournament, he hit .231/~.302/.436 with a couple home runs for the Silver Medalists.

Neptunus won another title in 2003 thanks to Isenia. He tied Norbert Lokhorst for the lead with 11 doubles and his 4 homers were one behind leader Evert-Jan 't Hoen. He tied van 't Klooster for 5th in RBI (26). In the 2003 Baseball World Cup, Isenia played DH so that Sharnol Adriana could be used at first. Isenia batted .333/.360/.583 with five RBI in six games. During the 2003 European Championship, Isenia was 3 for 6 in two games for the champion Dutch entry. In the 2003 World Port Tournament, Percy hit .243/~.282/.378 with 7 RBI to tie Fausto Álvarez for third in the event. He hit one of the two homers in the WPT that year; Tjerk Smeets had the other.

In 2004, the 27-year-old did not finish among the Hoofdklasse leaders in anything for the first time in five years. Isenia did not make the Dutch team for the 2004 Olympics as Yurendell DeCaster was chosen at first base instead with de Jong as the backup.

In the 2006 World Baseball Classic, Isenia struck out against J.C. Romero as a pinch-hitter for Adriana in the 8th inning of game one. In game three, he was 2 for 4 with a walk as the #5 hitter and DH in a rout of the Panamanian national team. Overall, his .400/.500/.400 line produced a better OPS than the team's other 1B/DH options, major leaguer Randall Simon and AAA veteran Adriana.

Isenia was 3 for 10 with a homer (off of Jonder Martínez) for the Netherlands in the 2008 Olympics, splitting time at DH with Raily Legito.

In September 2007 Isenia became co-founder and coach/trainer of the first Dutch women's baseball team the Pink Panthers, which would use the facilities of Isenia's first baseball club HSV Zwijndrecht, of which he had been a member during 1981-1995. With Isenia the team trained and played a number of demonstration matches, with as a sort of grand final the one against Neptunus 2 in the Neptunus Family Stadium, just after the 2009 Baseball World Cup match Netherlands-Cuba. In 2010 the Pink Panthers will play in the regular Dutch baseball competition as a team of HSV Zwijndrecht. Isenia is involved in the selection of the women's baseball national team of the Netherlands to play in the 2010 Women's Baseball World Cup and also involved in the new Women's Baseball Netherlands Foundation. He was appointed manager for the Netherlands in the Women's Baseball World Cup in '10, the first year the Dutch participated.