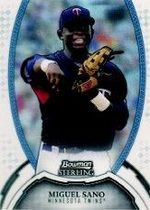 Third baseman Miguel Sano was one of baseball's top prospects in 2012 and 2013 but missed the next season because of injury.

Sano was signed by Minnesota Twins scout Fred Guerrero in September 2009; the $3.15 million bonus he got was a record for a Latin American amateur position player. [1] The Pittsburgh Pirates had offered $2.6 million earlier, but personality clashes between Pirates scout Rene Gayo and GM Neal Huntington and Sano's agent Rob Plummer led Sano to sign with Minnesota. [2]

Baseball America rated Sano as the Twins' #4 prospect entering 2010, behind Aaron Hicks, Wilson Ramos and Kyle Gibson. [3] He began his pro career in the Dominican Summer League with the DSL Twins in 2010, hitting .344/.463/.547 in 20 games before being brought stateside with the GCL Twins in midseason; he hit .291/.338/.466 in 41 games following the promotion. Defense was a problem as he made 22 errors on the year. Baseball America listed him as the second-best prospect in the Gulf Coast League (behind Gary Sanchez), #3 in the Twins chain (after Gibson and Hicks) and as #60 in all of baseball. [4]

With the Elizabethton Twins in 2011, he hit .292/.352/.637 with 20 home runs, 58 runs and 59 RBI in 66 games. He was second in the Appalachian League in runs (behind Eddie Rosario's 71), 5th in hits (78), tied for 8th in doubles (18, even with Art Charles), 2nd in triples (7, two behind Rosario), home runs (second, one behind Rosario), 3rd in RBI (two behind Charles, one behind Rosario), second in total bases (170, 11 behind Rosario), 4th in strikeouts (77) and 3rd in slugging (trailing Rosario and Chase Davidson). Defense remained a problem as he fielded .905 at the hot corner and just .836 at shortstop. Baseball America rated him as the top prospect in the circuit (ahead of Brandon Drury at #2 and Tyrell Jenkins at #3), as the Twins' top prospect and as the #18 prospect in all of the minors. [5] Even though he was in a short-season league, he nearly led Twins farmhands in home runs, one behind Rosario. He was named the Appy League's All-Star utility infielder, as Drury was picked at 3B and Taylor Motter at SS. He lost out Player of the Year to Drury and Rosario, who split the honor. [6]

He spent the next summer playing for the Beloit Snappers and led the Midwest League with 28 homers (9 more than runner-ups Anthony Garcia) and Kevin Patterson) and 100 RBI (by 14 over K.C. Hobson). He produced at a .258/.373/.521 clip, scored 75 runs, had 28 doubles and walked 80 times. He did make 42 errors at third, fielding only .884 there. He also was 9th in the Midwest League in OBP, 3rd in slugging (after Colin Walsh and Garcia), 2nd in OPS (56 points shy of Walsh), first in total bases (238, 20 more than #2 Drew Vettleson), second in walks (two behind Zeke DeVoss), tied for 4th in strikeouts (144). Among Twins farmhands, he was 5th in runs, tied for 4th in doubles, first in home runs (9 ahead of Chris Colabello, Deibinson Romero and Wilkin Ramirez), first in RBI (two ahead of Colabello and Oswaldo Arcia), first in walks (one ahead of Hicks) and was second in total bases (15 behind Arcia). He was named the MWL Prospect of the Year and All-Star third baseman, while Kevin Pillar got the MVP. [7] Baseball America ranked him as the Twins' #1 prospect, as the #9 prospect in all of the minors, as the Twins' top power prospect and as having the best infield arm in the Twins chain as well as being the #2 MWL prospect (behind Javier Baez, followed by Francisco Lindor. [8]

He began 2013 with the Fort Myers Miracle and hit .330/.424/.655 with 16 home runs, 51 runs and 48 RBI in 56 games. In June of that year, he was promoted to the New Britain Rock Cats. Unsurprisingly, he made the World team for the 2013 Futures Game, hitting cleanup and playing third base. He grounded out against Taijuan Walker in the second, drew an Anthony Ranaudo walk in the 4th (and was stranded at 3rd), was plunked by Eddie Butler in the 6th and flew out while facing Kyle Crick in the 9th. For a World team that got just three hits (two by Xander Bogaerts), Sano's two times on base were one of the better points in a 4-2 loss. [9] With New Britain, he struggled a bit with his batting average, hitting .236 in 67 games, but the power was still there, with 19 homers. Between the two levels, his batting line was .280/.382/.610 in 123 games, with 30 doubles, 35 homers and 103 RBI. He struck out 142 times, but was not just a free swinger, as he also drew 65 walks.

He then suffered a major setback as he had issues with his throwing in spring of 2014 and had to undergo Tommy John surgery. As a result, he missed the entire 2014 season, returning to action in spring training with the Twins in 2015. While he did hit a pair of long homers in limited playing time for the Twins, he was not there to make the team, given the time missed and was sent back to AA to see if he could resume his career at the level where it had been interrupted. He was sent to the AA Chattanooga Lookouts where he hit .274 with 15 homers and 48 RBIs through July 1st when he was called up to Minnesota to make his debut. He hit his first major league homer on July 7th, a two-run 1st-inning shot off Kevin Gausman of the Baltimore Orioles. The Twins were surprisingly good in the first half of the season, but fell off badly after the All-Star Game. Sano was an exception, however, as he claimed the clean-up slot in the team's line-up and looked more like a seasoned veteran than a raw rookie. On August 12th, he went 3-for-3 with two homers and 6 RBIs to lead the Twins to an 11-1 win over the Texas Rangers. He had a great month of August overall, earning the honor of being named the American League's Rookie of the Month: in 27 games, he batted .298 with 7 doubles, 9 home runs, 18 runs scored and 26 RBIs. On September 9th, he won a game with a 10th-inning pinch homer off the Kansas City Royals' Franklin Morales for a 3-2 victory; prior to the homer, he had gone 0 for 14 with 11 strikeouts. He finished the year with a batting line of .269/.385/.530 in 80 games, with 17 doubles, 18 homers and 52 RBIs, good for an OPS+ of 146. He finished third in the voting for the 2015 American League Rookie of the Year Award.

Heading into 2016, Sano was slated to move to right field full time, following the retirement of Twins icon Torii Hunter, who was also on board to help him learn the position in spring training. That plan lasted only two months, until June 1st, when Sano was placed on the disabled list with a hamstring injury. He was reactivated on July 1st, and returned to third base at that point, also seeing almost equal time as the team's DH over the rest of the year. In 116 games, he hit .236, with 25 homers, 57 runs and 56 RBIs while the team had a dreadful season, losing 103 games.

On April 22, 2017, he was ejected from a game by umpire Mike Everitt for throwing a punch at Detroit Tigers catcher James McCann. He was objecting to a pitch thrown behind his head by Matthew Boyd, which he felt was in retaliation for Twins pitcher Justin Haley hitting JaCoby Jones in the face and sending him to hospital earlier in the game. Everitt did agree with Sano's assessment that the pitch was intentional, as he tossed out Boyd as well. Sano was handed an additional one-game suspension, along with a fine, for his punch. He was selected to take part in the 2017 All-Star Game, his first time being an All-Star, as one of two representatives from a much-improved Twins team, alongside pitcher Ervin Santana; closer Brandon Kintzler was later added to the team as an injury replacement. He was also picked to be one of the participants in the Home Run Derby preceding the game. He missed most of the final six weeks of the season with a leg injury, finishing with a total of 114 games, a .264 average, 28 homers and 77 RBIs. The injury kept him from playing in the Wild Card Game, however, and after the season, the Twins announced that he would undergo surgery on November 13th. On December 28th, a female photographer who covered the Twins back in 2015 accused him of having forcibly grabbed her against her will and tried to kiss her following an autograph session at a mall. Sano denied the accusation through his agent, but Major League Baseball opened an inquiry.

Sano had a rough season in 2018, as did the Twins. He played just 71 games because of a variety of injuries, hitting .199 with 13 homers and 41 RBIs. He split his time between third base an first base. After the season, he was involved in a traffic incident in his native Dominican Republic on October 7th, when he ran over a police officer outside a nightclub in San Pedro de Macoris, leaving him with a broken leg. According to the police report, he was driving a vehicle without a licence plate and was not carrying identification. He was detained for a few hours after the incident. Things continued to go poorly early in 2019, as he suffered a severe cut above the heel in his right foot after slipping on some metal stairs in January, an injury which required surgery and kept him out of action until May. He was activated on May 15th. The Twins had not really missed him as they were in first place in the AL Central at that point. On September 17th, he reached the 30-homer plateau for the first time of his career. Teammates Nelson Cruz, Max Kepler, Eddie Rosario and Mitch Garver had preceded him to the mark, making the Twins the first team in major league history with five such hitters. He finished the year at .247 in 105 games with 34 homers and 79 RBIs as the Twins set a new record for most homers in a season by a team with 307, and also won 101 games. However, they made a quick exit in the Division Series, being swept by the New York Yankees while Sano went 1 for 12, his only hit a solo homer off Tommy Kahnle in Game 1.

After playing principally third base the previous three seasons, Sano headed to spring training in 2020 prepared for a change, as the Twins had signed 3B Josh Donaldson as a free agent during the off-season, He was now ready to take over at first base. With the season shut down by the coronavirus pandemic, he became the object of accusations of kidnapping and assault in his hometown of San Pedro de Macoris. According to a local newspaper that June, Sano and three of his friends were accused by one Raudy Omar Sanchez de la Cruz of kidnapping, beating and threatening to hang him. He was requesting 10 million pesos (equivalent to $170,000) in compensation. Sano replied that the accusations were baseless and an attempt at blackmail, and filed a countersuit against Sanchez’s lawyer.