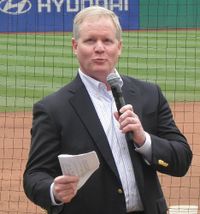 Huntington was a second-team All-American first baseman for NCAA Division III as a senior. He spent six years in the baseball operations department of the Montréal Expos. In 1998, he was hired as assistant director of the Cleveland Indians minor league system and became director of player development later that year. In November of 2001, he was promoted to assistant GM of the Indians. He also worked as an advance scout.

On October 5, 2007, he fired manager Jim Tracy after two seasons at the helm, as part of a front office purge. Senior director of player development Brian Graham, who had been interim general manager, scouting director Ed Creech, Director of baseball operations Jon Mercurio, as well as Tracy's entire coaching staff also lost their jobs in a gesture meant to indicate that the Pirates were taking a new direction after 15 consecutive losing seasons. Huntington hired former Pirates coach John Russell as the new manager.

In his first year and a half, Huntington made a series of moves that were unpopular with the fan base, trading away most of the team's starters - Jason Bay, Nate McLouth, Xavier Nady, Nyjer Morgan, Jose Bautista, Adam LaRoche, Freddy Sanchez and Jack Wilson - as well as pitchers Ian Snell, Sean Burnett, John Grabow, Tom Gorzelanny and Damaso Marte. In return, Huntington obtained a boatload of prospects: Gorkys Hernandez, Charlie Morton, Ross Ohlendorf, Jeff Karstens, Daniel McCutchen, José Tabata, Andy LaRoche, Argenis Diaz, Hunter Strickland, Tim Alderson, Aaron Pribanic, Brett Lorin, Nathan Adcock, Jeff Clement, Jeff Locke, Lastings Milledge, Joel Hanrahan, Robinzon Diaz, Craig Hansen, Brandon Moss, Kevin Hart, Jose Ascanio, Josh Harrison and Bryan Morris. In defense of his actions, Huntington explained "We don't feel like we've broken up the '27 Yankees" and said "If it doesn't turn around, I get fired." Given the barren state of the Pittsburgh farm system and lack of hope for the future when Huntington took over the GM job, many people argued that this was what the team had to do to rebuild, a project never undertaken by his predecessor.

As some of Huntington's prospect trade acquisitions (Morton, Tabata, Morris, Locke) were developing, the team's signees also were coming up (with Pedro Alvarez, Andrew McCutchen and Gerrit Cole leading the way) and other trade and free agent pickups were panning out (A.J. Burnett, Francisco Liriano, Russell Martin, Jason Grilli). The combination sent the 2013 edition of the team not only to a winning season but the playoffs. Huntington was a strong candidate for Executive of the Year but finished second to Ben Cherington. The Pirates returned to the postseason in 2014 and 2015, but made a quick exit at the Wild Card Game stage both years. This was particularly frustrating in 2015, as the Pirates had posted the second-best overall record in all of Major League Baseball, but were relegated to the Wild Card Game - which they lost to the Chicago Cubs - because the top team, the St. Louis Cardinals, played in the same division. The Pirates regressed after that great three-year run, going back to the middle of the pack.

Huntington decided to make some major moves before the 2018 season, namely trading team icons Andrew McCutchen and Gerrit Cole while they still held significant value. The trades were unpopular with fans, but a few other smart moves, such as acquiring OF Corey Dickerson from the Tampa Bay Rays at a bargain price, worked out well, and the Pirates played better than anyone expected early in the season, to the point that Huntington pulled the trigger on giving up some prospects to Tampa Bay to acquire ace SP Chris Archer at the trading deadline. That move did not work out as the Bucs faded quickly from the race after that, and attendance at PNC Park was down significantly that season. After the season, he was approached by the San Francisco Giants as a possible successor to Brian Sabean, but he turned out the opportunity, he said out of "his sense of commitment to the Pirates and a sense of excitement about what [was] to come in Pittsburgh." 2019 was a disaster, however, as the Pirates finished last even though 1B Josh Bell emerged as one of the top sluggers in the National League and a couple of young players like SS Kevin Newman and OF Bryan Reynolds played very well. The club was riddled with tension, especially the bullpen as there were a number of clubhouse fights and closer Felipe Vazquez was suspended due to allegations of sexual offenses involving a minor, his career in jeopardy. Manager Clint Hurdle was fired on the last day of the season, marking the end of an era. Team President Frank Coonelly was next to go and on October 28th it was Huntington's turn to pay the price as he was fired as well - while the search for a new manager was still under way.