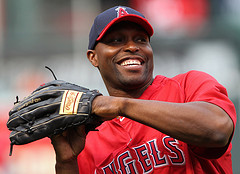 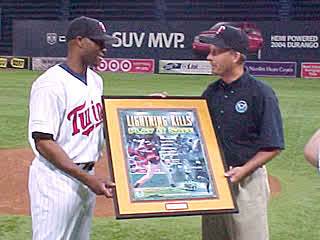 Torii Hunter hit the major league scene for keeps in 1999, having made his debut in 1997, and became a mainstay of the Minnesota Twins for nine consecutive seasons. A popular player with above-average skills, he hit more than 20 homers in each of nine seasons and played into his early 40s. A five-time All-Star, Hunter was also a consistent Gold Glove winner for many seasons.

2001 was considered Torii's first great season. He hit his second career grand slam on June 6th. He also led the Twins in home runs, while ranking second in RBI and slugging percentage. He received his first Gold Glove that year, leading all AL centerfielders in total chances at 478. He tied for the American League lead in assists (14) and finished 5th in fielding percentage (.992). He continued his fielding excellence for the remainder of the 2000s, winning his ninth straight Gold Glove award in 2009. Only one other member of the Minnesota Twins has ever won as many as the 7 he won for them in his career, pitcher Jim Kaat who garnered 12 of his 16 in seasons in which he played in Minnesota.

Outside of baseball, Hunter was largely involved in the community in the Twin Cities, working with organizations like Big Brothers and Big Sisters Of Minneapolis and St. Paul. He was also the spokesman for a lightning safety program through the National Weather Service in 2004.

In 2008, he left the Twins as a free agent and signed with the Los Angeles Angels of Anaheim, to take over centerfield for the previous year's free agent bust, Gary Matthews. He was coming off his best season, having slugged a career-high 28 homers and 107 RBI for the Twins in 2007. He continued his solid hitting for his new team, posting a line of .278/.344/.466 while continuing to play outstanding defense for the Angels. In 2009, he was the team's best overall hitter and won a Silver Slugger Award even though injuries limited him to 119 games. He hit 22 homers and drove in 90 runs while posting a .299 batting average in leading the Angels to another AL West division title.

On May 14, 2012, Hunter took a leave of absence from the Angels after his son, 17-year-old Darius McLinton-Hunter, was arrested in Prosper, TX on charges of sexual assault. He was placed on the restricted list to be given time to deal with this family issue. His son was one of five youngsters arrested on allegations that they were part of a ring that invited young girls to parties and drugged them in order to have sex. All three of Hunter's sons were standout high school football players at the time and were being courted by top college recruiters. The case received prominent nationwide coverage. Hunter returned to the Angels on May 28th, once he was confident that the matter was on its way to being resolved, with the more serious charges against his son having been dropped. A year later, his son would sue his accusers for $40 million in damages for making baseless accusations and ruining his reputation. In spite of the distraction, Torii played 140 games for the Angels that season, playing right field, during which he hit .313/.365/.451 with 16 homers, 81 runs scored and 92 RBI.

On November 14, 2012, Hunter signed a two-year free agent contract with the Detroit Tigers worth a total of $26 million. He replaced LF Delmon Young in the starting line-up in 2013. He collected the 2,000th hit of his career of April 9th and his 300th homer on June 16th, connecting against his former team, the Twins, at Target Field. He made the All-Star team for the fifth time that year, when he hit .304 with 17 homers and 84 RBIs in 144 games. In the postseason, he only went 3 for 19 (.158) as the Tigers defeated the Oakland A's in the ALDS, but improved to 6 for 26 with a pair of doubles in the ALCS against the Boston Red Sox. After the season, he was awarded with a Silver Slugger Award for only the second time of his career. He had another good season in 2014 as he hit .286 with 17 homers and 83 RBIs in 142 games as the Tigers repeated as AL East champions. Tat year however, they were eliminated from the postseason in a three-game sweep at the hands of the Baltimore Orioles in the ALDS. Torii went 2 for 10 and scored a couple of runs in the series.

On December 2, 2014, he returned to his original team, the Minnesota Twins, signing a one-year deal for $10.5 million. In addition to playing regularly, the Twins wanted to see him act as a mentor for young outfielders Aaron Hicks and Byron Buxton. He went on a torrid stretch with the team early in the season, getting hits in seven consecutive at-bats when he had a 4-for-4 day on May 8, 2015 following a hit in his last at-bat the previous day, and hit in his first two at-bats on May 9th. The streak coincided with the Twins winning 9 of 10 games. On June 10th, he was ejected in the 8th inning of a game against the Kansas City Royals for arguing balls and strikes with umpire Mark Ripperger; he then threw a tantrum worthy of a 1970s manager, tossing off his elbow guards, his batting gloves, his helmet, and finally his jersey on the field before leaving the game. Manager Paul Molitor also came out to defend his player, but he only succeeded in getting himself ejected as well. He also earned a two-game suspension for his performance. Torii explained after the incident that he thought the Twins were being taken advantage of because they were too nice and decided to do something about it. As he explained: "I knew what I was doing. I just had to make sure there was no one in the way. I didn't want hit one of the umpires with anything. I wanted to let our team know that we're not going to stand for it anymore. A lot of these guys have never won before, so you got to show them the way. You got to get the losing spirit out of here. It's real. And it's contagious." He retired at the end of the season, having hit .240 with 22 homers and 81 RBIs in his final year. For his career, in 19 seasons, he hit .277 with 353 homers, 2452 hits, 1296 runs and 1391 RBIs.

He is a cousin of Choo Freeman. He grew up in difficult circumstances, and his father has struggled with a dependency on drugs for most of his adulthood. His oldest son Torii Hunter Jr. went to the University of Notre Dame on a football scholarship as a wide receiver but also played outfield on the school's baseball team and was selected by the Angels in the 23rd round of the 2016 amateur draft. Torii Jr. signed with the Angels shortly after the draft, although he made it clear football was still his top priority - until he decided to forgo his final season of football eligibility to begin a professional baseball career in 2017.

Hunter had stated that after he retired, he wanted to work in a major league front-office - preferably the Twins' - and pictured himself as a future General Manager.

He first became eligible for the Hall of Fame in 2021 and received 9.5% of the vote to remain on the ballot for at least one other year.