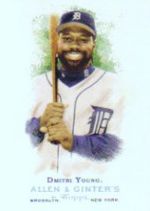 Dmitri Young was selected by the St. Louis Cardinals in the first round of the 1991 amateur draft with the fourth overall selection. When his brother, Delmon Young was made the first overall pick in the 2003 amateur draft, the Youngs became the first set of brothers taken within the first five picks of the draft.

While playing for the Detroit Tigers, he earned the nickname Da Meat Hook. In 2003, his 167 hits outpaced his closest teammate by 53 - the biggest difference between any first and second on any team in the American League. On April 4, 2005, Young became just the third player in Major League history to homer three times on Opening Day. In August of that year, he hit two grand slams in three days.

2006 proved to be a difficult year for Young. Early in the season, he was charged with domestic violence after assaulting a woman in Birmingham, MI in April. He was later sentenced to a year's probation. He then missed a month of the season after checking into rehabilitation for depression and alcohol abuse. Young was a fan favorite during his time with the Tigers. His divorce from his wife, Rebecca, during his last season and the season prior, is said to have had an effect on his game during his final months with the team. Finally, he was released by the Tigers in September after hitting .250 with 7 home runs in 48 games with the team, thereby missing the team's run to the World Series.

In March of 2007, he was promoted to the big league camp for the Washington Nationals, after proving himself in spring training in their minor league camp. Young became the starting first baseman, wearing # 21, replacing the injured Nick Johnson. He was one of the team's better players, earning the right to represent the Nationals at the 2007 All-Star Game and finishing the year with a .320 batting average to go along with 38 doubles and 13 home runs. He was named National League Comeback Player of the Year when the season ended. He was signed to a multi-year contract after the season, which was criticized when Johnson beat him out of the Nationals' first base job in spring training of 2008. However, Johnson again went on the disabled list for the remainder of the year in June, leaving the job to Young by default. Still, he proved the naysayers right by playing only 50 games with 4 homers, 10 RBI and a .280 average and played what turned out to be his last major league game in early July. He was suffering from diabetes caused in part by weight control issues.

In 2010, Young announced he was retiring as a player and then landed a job as a coach with the Oakland County Cruisers. Shortly thereafter, he decided to move to a healthier lifestyle, and began working out and shedding weight. Having lost a quarter of his playing weight after stabilizing around 232 pounds, he was the MVP of the 2011 "Hall of Fame Classic", an old-timers game played at Cooperstown, NY. That encouraged him to continue working out, and by early 2012, he had progressed enough that major league teams were showing interest in signing the now 38-year-old slugger. The Pittsburgh Pirates offered him a workout in front of manager Clint Hurdle on February 14th, but he failed to impress enough to be offered a contract.

He has three children from his marriage, Owen, Damon, and Layla - all of whom reside in Florida with their mother. His parents and siblings live near Oxnard, CA.