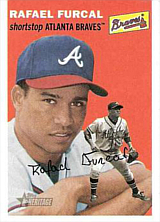 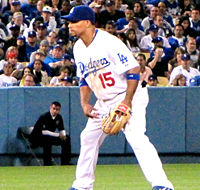 Rafael Furcal is nicknamed "El Enano", or "the dwarf", and "Furkey". He and Ellis Burks held the record for the most seasons in the playoffs without winning a series, as each had gone 0-6 in postseason series (through 2006). Furcal broke the streak in 2008.

He turned an unassisted triple play on August 10, 2003 against the St. Louis Cardinals. Pitcher Woody Williams was the batter.

He was thought to be 19 when he debuted, but it was later discovered he was really 22. When he made his debut, he was celebrated as the firtst player born in the 1980s to appear in a major league game, but obviously it wasn't the case; it was actually Albert Pujols who had this honor when he made his debut a full year later. He was the National League Rookie of the Year when he debuted with the Atlanta Braves in 2000, when he hit .295/.394/.382 with 40 stolen bases in 131 games while displaying his trademark outstanding arm at shortstop.

Furcal batted .400/.444/.500 with 5 runs for the Águilas Cibaeñas in the 2008 Caribbean Series and provided all their offense in the finale with a two-run homer as they finished second. He was named to the Series All-Star team at second base; he was playing second because of the presence of Tony Pena Jr. at shortstop.

Furcal's career was slowed by a string of injuries. He missed half of the 2001 season, but then was a workhorse from 2002 to 2007, playing at least 138 games each season during that stretch. He led the National League in triples in 2003 and was also an All-Star that season. His health problems began in 2008, after he joined the Los Angeles Dodgers as a free agent in 2006, when he played only 38 games during the regular season before coming back for the postseason. He was the Dodgers' starting shortstop in both the NLDS and NLCS that year. He played a full season in 2009, hitting .269 in 150 games, then was at his best in the NLDS as he went 6 for 12 with a triple against the St. Louis Cardinals; he was only 3 for 21 against Philadelphia Phillies in the NLCS however. He only played 97 games in 2010 because of back problems, but hit .300 and made the All-Star team for the second time.

On April 11, 2011, he broke his thumb sliding into third base on a stolen base attempt against the San Francisco Giants, sending him back to the disabled list for an extended period. On July 30th, he was traded to the St. Louis Cardinals for minor leaguer Alex Castellanos. He hit .255 in 50 games for the Cards, stabilizing their middle infield and often acting as the lead-off hitter as the team surged into a playoff spot on the last day of the regular season. He started all 18 postseason games at shortstop for the Cardinals as they won the 2011 World Series, playing solid defense even if he hit only .195. On December 10th, he re-signed with St. Louis for two years and $14 million.

Furcal played well for the Cardinals in 2012, hitting .264 in 121 games with 18 doubles, 5 homers and 49 RBI. He was named to play in the All-Star Game for the third time. An elbow injury forced him to miss all of September and the entire postseason, as Pete Kozma took over at shortstop. He was hoping to return to action in 2013, but after playing only one game in spring training, it became obvious that his elbow had not healed, and the decision was made to undergo Tommy John surgery, wiping out the entire season. The following offseason, he signed a contract with the Miami Marlins, hoping to make a comeback in 2014, where he was expected to compete for the second base job, as the Marlins already had a young defensive wizard entrenched at shortstop in Adeiny Hechavarria. It took a couple of months until Furcal was ready to play again, as he needed some time in the minor leagues to get back into game form, playing 21 games between the Class A Jupiter Hammerheads and Double A Jacksonville Suns. He made his first appearance in the majors on June 13th, batting leadoff and playing second base for the Marlins in an 8-6 loss to the Pittsburgh Pirates during which he went 0 for 6. He only played 9 games for Miami, hitting .171, then injured his left hamstring.

He signed with the Kansas City Royals in 2015, but failed to make the team and announced his retirement on May 19th after hitting .240 in 25 at-bats for the Class-A Wilmington Blue Rocks. He became eligible for the Hall of Fame in its 2020 election but did not receive a single vote and was dropped from the ballot.