Note: This page discusses 1990s and 2000s outfielder Luis Gonzalez. For others with the same name, click here. 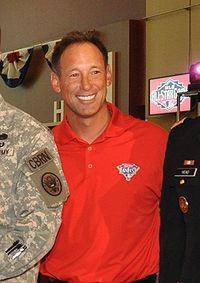 While attending Jefferson High School in Tampa, FL, Gonzalez was a teammate of Tino Martinez. Gonzalez was inducted into the High School's Hall of Fame. Luis's brother is Rex Gonzalez. His son Jacob Gonzalez was a 2nd-round pick by the San Francisco Giants in the 2017 amateur draft.

He first came to the majors at the end of the 1990 season with the Houston Astros, who had selected him in the 4th round of the 1988 amateur draft. While he played just 12 games that year, hitting .190, he became a regular in 1991 and would play over 100 games every season for the next 18 years, until he retired following the 2008 season, which he spent with the Florida Marlins. In his first seasons with Houston, he was a line drive hitter with good doubles power, hitting 34 two-baggers in 1993, in a season in which he also hit .300 for the first time. Midway through the 1995 season, he was traded to the Chicago Cubs along with Scott Servais in return for Rick Wilkins. He remained a starter in the Cubs outfield, hitting .290 in 77 games the rest of 1995, and then .271 with 15 homers and 79 RBIs in 1996. In 1997, he returned to the Astros as a free agent and hit .258 with 10 homers and 58 RBIs. However, the Astros won a division title and he got to play in the postseason for the first time, going 4 for 12 in a loss to the Atlanta Braves in the Division Series.

Following the 1997 season, Gonzalez signed another free agent deal, this one with the Detroit Tigers. He only played one season in the American League, in 1998 but put up some of the best numbers of his career thus far. In 154 games, he slugged 35 doubles and 23 homers, both personal bests, as were his 84 runs scored, to go along with a .267 average. Up until then, he was really nothing special, a solid outfielder who was reliable defensively and hit reliably slightly above average thanks to a combination of skills. On December 28th of that year, he was traded to the Arizona Diamondbacks in return for OF Karim Garcia, who was seen as a budding star. However, the Diamondbacks, inspired by what their predecessors in expansion, the Florida Marlins and Colorado Rockies had done a few years earlier, had decided to take a shortcut to contention after a tough first season in 1998 by acquiring established major league players who would not need to go through growing pains. Gonzalez fit the bill, but no one saw that he would develop into a superstar in the desert.

Arizona confounded the experts by making a tremendous improvement in 1999, going from 65 wins to 100 and winning a division title, becoming the fastest expansion team to reach the postseason. Left fielder Gonzalez was one of the major artisans of that turnaround as he made the All-Star team for the first time, led the National League with 206 hits, and batted .336 with 45 doubles, 26 homers, 112 runs and 111 RBIs, all of these being personal bests. That was the start of a seven-year run of great production that would make him one of the best players in franchise history. In the Division Series, which Arizona lost to the New York Mets, he went 2 for 10 with a double and a homer and drew 5 walks. On July 5, 2000 against the Astros, "Gonzo" became the first-ever member of the Diamondbacks to hit for the cycle. This was the 229th cycle in major league history. He played all 162 games that season, something he would do in 2001 as well, and once again scored and drove in over 100 runs, improved his doubles total to 47 and his homers to 31, and hit .311. It was another excellent season, but a bit lost in the shuffle as the Diamondbacks missed the postseason.

No one could miss his 2001 season however, as he had a career year and Arizona won what is still the lone World Series title in franchise history. As mentioned above, he had a completely unexpected power outburst at age 33, hitting 57 dingers, but that was just scratching the surface. He batted .325, slugged .688, his OBP was a sparkling .429, he hit 36 doubles, scored 128 runs and drove in 142. He was the National League Player of the Month twice, in April and June, was named to the All-Star team, won a Silver Slugger Award for the only time and finished third in the voting for the MVP Award. He kept it up in the postseason, going a combined 9 for 38 with 2 homers in the first two rounds, but kept his best for the Fall Classic. In Game 7 of the 2001 World Series against the New York Yankees, with a 2-2 tie and 1 out, González blooped the game-winning hit, for which he is sometimes known as "Mr. November" among Diamondbacks fans. It was one of 7 hits for him in the series.

He fell back to more normal production levels starting in 2002, when he hit .288 with 28 homers and 103 RBIs in 148 games. He made it to the All-Star Game for the third time but was injured late in the season and as a result missed the postseason when the Diamondbacks made a quick exit, being swept in three games by the St. Louis Cardinals in the Division Series. He had two more 20-plus homer seasons for Arizona, hitting 26 homers in 2003 and 24 in 2005. He made the All-Star team both of these years, but the team fell out of contention. He was still playing almost every day, though, except for 2004 when an injury limited him to 104 games, and remained a productive hitter until 2006, his final season with the team, when he was limited to an OPS+ of 99 at age 38, his first time below average since 1997. It looked like he was running out of gas, but he managed to play two more seasons and to be a regular both years, with the Los Angeles Dodgers in 2007 and the Marlins in 2008. He had a decent year for L.A. with an OPS+ of 104 in 139 games with a .278 average, 23 doubles and 15 homers, and did not embarrass himself in his final season at age 40, when he hit .261 in 136 games, although he was down to 8 homers and 47 RBIs and an OPS+ of 95. Overall, in 19 season, he hit .283 with 2591 hits, 354 homers and 1439 RBIs. Those are very good numbers for a player who was basically unheralded until he was 30 years old.

Gonzalez was named a special ambassador for the 2011 All-Star Game, played in Phoenix, AZ and was also named manager of the world team in the 2011 Futures Game played as part of the All-Star festivities.

In his first year of eligibility for the Hall of Fame in 2014, he received only 5 votes (0.9%) and dropped off the ballot. On June 2, 2017, he made the news for a heroic gesture, as he helped pull a woman from a crashed burning car. He was a passenger in a nearby vehicle when he witnessed the head-on crash and rushed to the driver's aid, helping to pull her to safety.